Home Article Here are Seven of Donald Trump's Most Controversial Tweets of 2017: Must See!

Here are Seven of Donald Trump's Most Controversial Tweets of 2017: Must See! 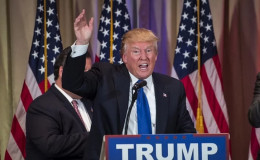 Donald Trump is not only famous for his power and 45th Presidency in America but also popular for his controversial tweets. His tweets have managed to grab the attention of everyone

Donald Trump is not only famous for his power and 45th Presidency in America but also popular for his controversial tweets. His tweets have managed to grab the attention of everyone, and with just a few words on his tweet, President Trump can spark a firestorm on the internet.

With over 31 million followers on his Twitter, the real estate mogul has amassed quite a fan following and while the end of 2017 is coming near, today we've hot listed the top seven most controversial tweets of Donald Trump. Stay Put!

7. Attacking the Host of Morning Joe

On early June morning, Trump attacked the hosts of Morning Joe, Mika Brzezinski, and Joe Scarborough, criticizing the way they report and it drew a lot of attention in media about cyberbullying.

Trump's wife Melania Trump had pledged to create an anti-cyberbullying campaign as First Lady but it's pretty ironic that the White House members defended the misogynous and low standard tweets of the President. The tweet has been retweeted more than 21k times.

Former FBI director, James Comey was fired unexpectedly by Trump and within few days, Trump posted a suspicious tweet (retweeted 25,402 times) stating that he secretly recorded his conversations with James Comey and warning him to not leak them.

This tweet awoke the entire White House over whether Trump has secret recording system installed inside the White House but after full 41 days of the tweet, he later clarified that he didn't have any such recordings.

5. New York Times's Claims Trump watches up to 8 hours of TV a day

This is by far the most riotous controversy created by President Trump. On Monday, December 11, Trump posted his complaints via Twitter stating that New York Times reportedly exaggerated the amount of time- 8 hours a day he watches the television. 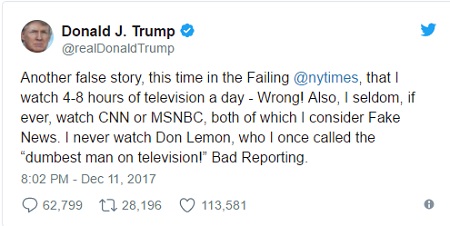 The President defended himself and wrote he seldom watches CNN or MSNBC and never watched Don Lemon, the host who once Trump called the dumbest man on television. The tweet caused a stir in the media and has been retweeted 28,196 times. Trump also tweeted six attacks on what he calls "fake news" over the weekend, writing that the "out of control" media purposely put out false and defamatory stories.

The debate regarding Trump's  possible association with Russians in hacking the system and Democrats made Donald J. Trump furious and he tweeted:

"This is the single greatest witch hunt of a politician in American history!"

The Justice Department had announced that former FBI director Robert Mueller would be a special counsel to analyze the ongoing investigation and ever since, the phrase "witch hunt" has become Trump's favorite slang for ongoing investigations and probes and it has been retweeted 36,164 times till today.

Donald Trump called many major news organizations covering his presidency- "fake news." He denounced most of the news organizations including CNN, CBS, ABC and NBC with many tweets with this one stood out to be rest when he called media organizations "The enemy of the American People" and it got retweeted 52,319 times.

All the mainstream news organizations backfired on his scandalous tweet. The New York Times stated the enemy of the people phrase explains as "more typically used by leaders to refer to hostile foreign governments or subversive organizations."

Trump didn't step back in accusing his predecessor Barack Obama of wiretapping the Trump Tower ahead of the 2016 presidential election. Yet for something this serious like accusing a president of politically motivated surveillance of U.S. citizen, Trump could not offer any evidence of his claim. The tweet raised a lot of eyebrows and it was retweeted more than 53K times.

You might be wondering what is 'covfefe', whether it's actually a word or just jumbled up letters? Well, this word created a buzz in the media when just after midnight on 31 May 2017, Donald Trump tweeted: " Despite the constant negative press covfefe" and that was it, no more. 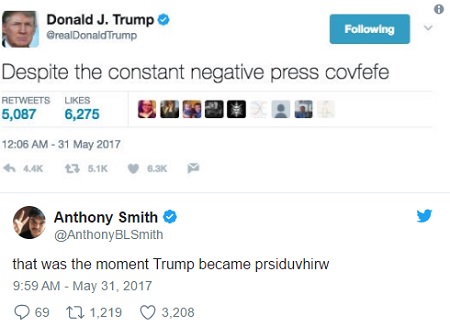 The "Covfefe" tweet by Donald Trump that baffled the internet
Source: TheGuardian

The tweet stayed there for few hours and the internet went crazy over it with 83,216 retweets, trolls and memes leaving his 31 million followers baffled and concerned. The tweet was later removed and Trump added another tweet reading: "Who can figure out the true meaning of covfefe??? Enjoy!" And yet the meaning of the word has not been clarified but Trump's spokesman Sean Spicer later insisted that president "knew exactly what he meant."