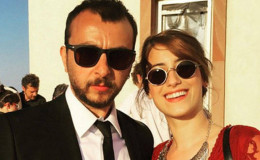 Hazal Kaya is currently dating Ali Atay. Let us find out about the hot couple relationship.

Leyla Hazal Kaya is a Turkish actress and model who is famous all around the world for her beautiful yet seductive eyes and sexy body. She has millions of fans all around the globe, but she has given her heart to only one person and that person is another Turkish actor Ali Atay.

She is currently having a very blissful relationship with Ali Atay. Ali who divorced his wife Ebru Cansiz in 2013, is enjoying his life to the fullest with girlfriend Hazal. Though the couple got separated once as Ali was still with his wife and they haven't divorced as of yet.

But after finalizing his divorce with his wife he and Hazal came back into a relationship.

She is very happy with Ali and she wants to continue her current relationship with him for a long time. The couple is having the best of life as they are often spotted hanging out together and they look so comfortable with each other. Hazal often uploads her picture with her boyfriend in her Instagram account and it really shows how happy the couple really is.

Recently, the pair celebrated their three years of togetherness and uploaded an adorable picture of each other where they were cuddling and hugging.

The picture looked so beautiful and the smile that the couple was giving really showed the love and passion between them.

Previous Relationship of Hazal and Ali

She then dated Turkish photographer Cahlt Baha Pars in September 2010. They were together for two years until their split in March 2012.

Then she dated actor Sarp Bozkurt. The beautiful actor was looking so good with this sexy diva and everyone was seeing both of them as the perfect couple but they broke up in 2013.

Ali was previously married to Ebru Cansiz in 2008. After having no mutual understandings between them they divorced each other in 2013.

Ali and Hazal are looking very good together. Only time will tell if their relationship is going to last or not.