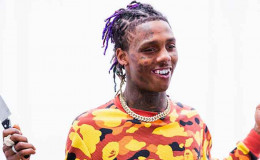 American rapper Dexter Gore Jr. widely known by his stage name Famous Dex regularly create headlines in media; sometimes because of his personal life and sometimes for his songs. This time, the story is something totally different.

American rapper Dexter Gore Jr. widely known by his stage name Famous Dex regularly creates headlines; sometimes because of his personal life and sometimes for his songs. This time, the story is something totally different.

The star grabbed media attention when he was accused of pulling a gun on concertgoers who surrounded his cars when the concert was canceled at the University of California-Irvine on 20th October. What was the real reason behind this rumor?

This time, Famous Dex has created a lifetime impression and it's in a negative way. He allegedly pulled a gun on UC Irvine students after the concert was canceled because of his stage diving.

Wow I love you Guys

"University police on site declared it was a dangerous situation, so they turned on the lights and canceled the rest of the show."

As per the reports, he dove in the crowd sparking a stampede. His act made the organizers cancel the show early. As the 'Japan' rapper went to leave in his car, a group of students surrounded him.

As per the footage, the rapper was telling the crowd to back away from his car. After warning the crowd, he pulled out his gun to the crowd.

#FamousDex performed at #UCI’s annual Shocktoberfest last night, but his set ended abruptly after he crowd surfed and school organizers pulled the plug. “University police on site declared it was a dangerous situation,” UC-Irvine spokesman Tom Vasich told the Los Angeles Times, “so they turned on the lights and canceled the rest of the show.” After the chaos seemed to be clear, concertgoers surrounded the Chicago rapper’s car and he ordered them to get back. After no one listen, you see Dex lean out wielding what appears to be a gun. #TwoBeesToldMe www.twobees.org

Dex is yet to address the incident.

Famous Dex's Relationship With His Girlfriend And Children

Unlike many famous faces, Dex Meets Dexter star Famous Dex is quite open about his family life and children.

He is a proud father of three children; a son and two daughters but the identity of the baby mama is always kept secret. 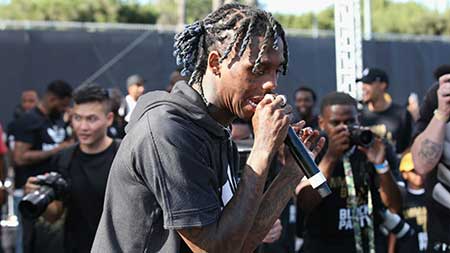 Rapper Famous Dex might be single at present
Source: The Daily Beast

The proud and loving father make a frequent appearance with his adorable kids on social media but what about his dating life? Is he still with the baby mama or the story is something beyond our imagination?

Have a look at his family image:

One of his Instagram posts made his fans create gossip about his personal life and make everyone speculate that he's no more with his girlfriend.

Hey bay I love you

He posted an image holding a dummy resembling a girl. It simply reflects that he's some issues with his love life.

Back in September 2016, the singer was reportedly caught on camera in a physical confrontation with his girlfriend. In the CCTV clip uploaded to Instagram by user Listen2tish, he was spotted hitting and pushing his partner.

Later. he took Twitter to defend his action and stated:

"Me an my Girl Ok Y'all S**t Happen I'm Not Perfect Bt it's God Know that Problem Gone Now (sic)."

"God Know Im Sorry For Fight She wasn't Hurt my I Cut My Hand Like Wtf Im Not Like That She Cheated on me an She Was Wrong God Know (sic)."

One barely knows if he's still with his girlfriend or not. We expect him to reveal some of his personal details soon.