Home Article Is Ashley Parker Angel married? Know about his children and family.

Is Ashley Parker Angel married? Know about his children and family. 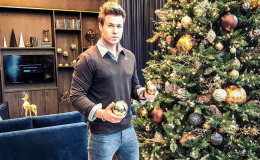 Ashley Parker is happy with his life right now. Ashley Parker has a son named Lyric. But who is the child's mother? We uncover the truth for you.

Ashley Parker Angel is an American singer, songwriter, and actor who is popularly known from his boy band O-Town.

Ashley's career has always been like a roller coaster ride. Even his relationships, his marriage, his career, etc are all has always been subjected to controversies. He was most recently linked to American actress Jillian Murray. Similarly, he has a child with his then-girlfriend Tiffany Lynn Rowe. Let us find out more about him.

Ashley Parker Angel And His Girlfriend Tiffany Lynn Rowe; Are They Still Dating?

Ashley was in a long-term relationship with his girlfriend and model Tiffany Lynn. The couple also got engaged after their five-year of relationship but they never married each other.

After their engagement in 2005, the couple welcomed their first child in August 2006. They named the boy Lyric Lennon.

The couple seemed very happy with each other but due to some misunderstandings between them, they broke up in June 2008.

In 2009, it was announced that Ashley is in a relationship with actress Jillian Murray. They dated each other for one year from 2009 to 2010.

The couple was spotted multiple times hanging out and but luck was not on the side of Ashley as he broke up with her after just one year of relationship due to some unknown reason.

Ashley has a son with his ex-fiancee Tiffany Lynn Rowe named Lyric Lennon, born in August 2006. Lyric is living with Ashley and he seemed to be pretty close with his father.

Ashley has enjoyed seeing his son growing up. He recently uploaded a picture of his son getting graduated from school.

Lyric is now a star as he has starred in Hollywood movies like American Horror Story: Hotel. He has a very bright future ahead.

Ashley is currently single and it seems like he has nothing to worry about. He recently opened an Instagram account and his followers are very happy to see him.

Truth to be told we are quite amazed to see how Ashley is bouncing back in his life and there are many things to learn from that.

Who Is Jeremy Shada Dating Currently? Know In Detail About His Current Affairs And Relationship