Home Article Who is Stpeach's Boyfriend; Know About Her Past Affairs and Dating Rumors

Who is Stpeach's Boyfriend; Know About Her Past Affairs and Dating Rumors 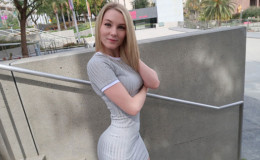 STPeach is not a new name on social media as many people recognize her on the online gaming platform Twitch. The lady star whose real name is Lisa Peachy began streaming in 2015 and since then possesses a massive fan following.

Many might feel heartbroken to hear that the gorgeous lady is already taken. She is enjoying a smooth and sound relationship with her lover. If you want to know more about that, we've covered all that you need to know about STPeach's love life and how is it going on.

Who is Twitch Star STPeach's Boyfriend and Past Relationship?

STPeach is savoring a happy love life for a good number of years now. She is dating a Korean boyfriend, Jay. The couple first got to know each other through online gaming in 2011. At that time love did not sprout between the two and they were just friends. Back then, they were in their own respective relationships.

Merry Christmas Eve, from us to you #disneyland

It was only in late 2016 when they physically met at an airport in California. The meeting marked the beginning of romantic love between two people of different culture and background.

Jay was an excellent match for the Instagram star since she liked Asian guys as she had many Asian friends while growing up. As for their relationship status, the pair are going stronger than ever.

As a matter of fact, Peach and Jay are now engaged to get married very soon. The fitness model announced the good news via her Instagram on May 22, 2018. Well, congratulations from us beforehand for the couple!

STPeach with her boyfriend Jay.

The lovely pair spends most of the time together and are seen traveling to various places. Recently, the beautiful lady shared a picture with her sweetheart wishing him on his birthday. On the post she wrote:

"Happy Birthday to the love of my life, my future hubby, I'm so happy you were born, I love you"

Well, we probably don't have to give any more proof on how much StPeach adores and loves her partner.

Although many people were happy for STPeach and her lover Jay, the same cannot be said about everyone. The duo faced waves of verbal abuse on the Internet for their relationship. Many of Vlogger's male fan followers wrote bad and mean comments to them.

You May Also Like: American YouTuber Asmongold Dating a Girlfriend? Know About His Affairs and Rumors!

Especially Jay faced racial abuse because of his Asian background. He was called  “Asian manlet,” “gook,” “homo,” “Chinese” and  "motherf**ker", while his girlfriend “yellow fever” and even called a “race traitor,”. 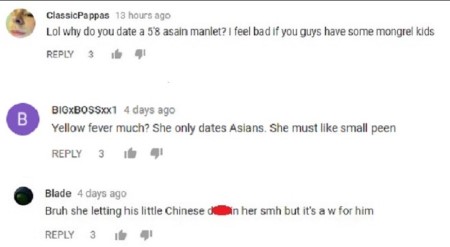 Racial comments against STPeach and her boyfriend Jay.
SOURCE: Flipboard

The 25-year-old revealed that she does not let the hate get to her. She told in an interview:

“I’ve gotten everything from being called a slut to much meaner things on the internet. It is honestly just funny at this point. People that have the time to comment these things aren’t happy with themselves, and you have to keep that in mind while putting yourself out there for people to judge.”

The online gamer even spoke on behalf of her lover and defended him from the people's abuse. She tweeted on her Twitter account on February 02, 2019.

It literally blows my mind that so many people are still this racist...

For the record, Jay is the most amazing, funny, caring, sweet and understanding person I've never met. He treats me AND others with respect, and I can't wait to have cute ass mix babies with him pic.twitter.com/zsXtJAl9M1

The charming lady also told that such abusive and racial comments don't really affect their relationship and in fact, keeps their bond even stronger.

"We are both happy with one another. The hate doesn’t affect us or our relationship together. To be honest, we find it funny that it’s even a topic of discussion because it just seems like such a normal thing to us."

We praise the couple for standing together while so many are against them. Additionally, we do hope the day is not very far when the couple walks down the aisle. 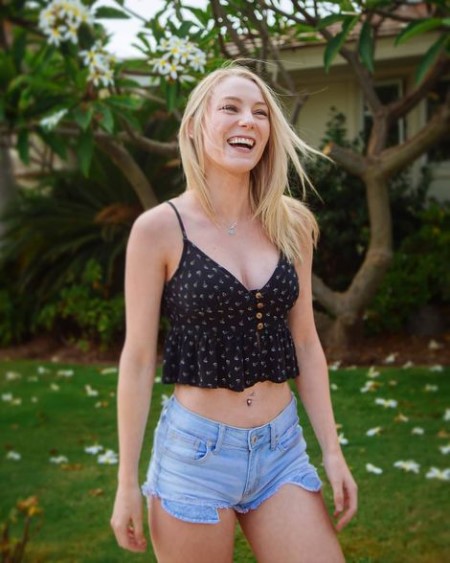