Home Article Who is Zendaya Coleman's Boyfriend? Find out her Relationship Status.

Who is Zendaya Coleman's Boyfriend? Find out her Relationship Status. 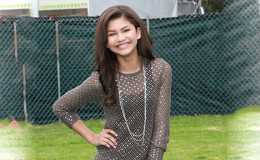 Zendaya Maree Stoermer Coleman (born September 1, 1996),[4] known mononymously as Zendaya, is an American actress, singer, and dancer. From 2010 to 2013, she starred in the Disney Channel sitcom Shake It Up as Rocky Blue.

This Disney's star, featuring on popular Disney sitcom "Shake It Up" rose to fame instantly at such an early age and her popularity makes everyone envy her, mostly because of all the gorgeous men she's been with.

After denying the rumors of her dating heartthrob, American singer, and dancer Trevor Jackson, Zendaya was recently spotted with another hunk who plays for National Football League (NFL), Odell Beckham Junior.

This mysterious duo's encounter has left their fans biting their nails and they want to know more about this. So let's dig out what's really cooking between this rumored pair.

Who is Zendaya dating now?

Amidst all those glitz and glam on the red carpet during the Grammy's, Zendaya and Odell were seen posing together for the paparazzi and they seemed really cozy together.

Later, TMZ also reported the duo were leaving together after the show.

However, when the reporter questioned if the pair were dating, Zendaya's dad immediately responded saying,"It's an audition!"

Well, seems like both the pair is fresh in the relationship and do not want to commit anytime sooner.

Also on an interview with NewYork radio station 92.3,  Zendaya clarified the rumors and stated that her relationship surely requires her father's approval. She stated:

“Here’s the thing: Even if it does progress, you gotta go through my dad first, Just because you’re in the NFL, you killin’ stuff, that doesn’t mean you get to skip past pops. He’s not going to allow that to happen.”

This confusing statement of Zendaya, possibly signals that she's having a secret relationship with Odell which is yet to be approved by her father Quite a story, isn't it?

It's obvious that the popular actress, singer, and dancer, Zendaya who is versatile and so beautiful is bound to be rumored with the potential celebs.

She is a famous fashion model, has her own lines of clothing and shoes and now even starring in the upcoming film "Spider-Man: Homecoming", with the release due date in 2017. Who wouldn't want to date her?

Who wouldn't want to date her?

Well, she has been rumored with different men but it has not been confirmed yet.

This is Zendaya's first rumored fling and more like a "teenage crush" type of relationship that started around 2010.  Both were just 13-years-old when the gossip started swirling around.

Adam was her "Shake it Up" co-star and as romantic as they were on screen, they were not off-screen and stated that they were only close friends.

They were spotted together often, celebrating birthdays and hanging out together leaving its and bits of signals here and there.

Zendaya and Trevor seemed inseparable since the past few years as both were seen doing everything together, from featuring in Trevor Jackson's video together to taking golf lessons.

This love story has already gone downhill since Zendaya was spotted with the 25-year-old footballer, Odell.

Here's a video of Zendaya and Odell leaving together after a Grammy Party.

Well, we really hope that this time the duo confirm their relationship and clear all the confusion.

Updated: She is currently rumored to be dating her co-star Tom Holland from the upcoming movie Spiderman.