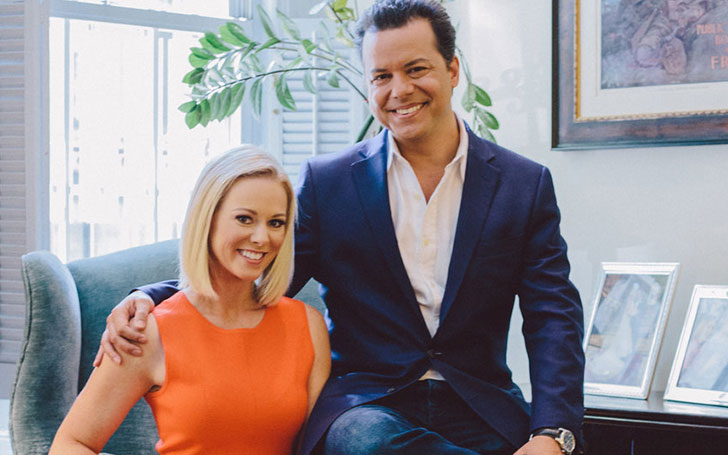 When a couple is together almost all of the time, either they get bored with each other or fall in love even more if it is even possible. For Margaret Hoover and her husband John Avlon, what's the case? Let's have a look on that.

Living the life of Margaret Hoover wouldn’t be easy as she has multiple jobs that take up her time. Being majorly known as an American Political Commentator, she is a political strategist, media personality, feminist, gay rights activist and an author having the best selling book “American Individualism: How A New Generation of Conservatives Can Save the Republican Party”.

And on top of that,  to justify the role of a wife and a mother does not subtract the burden either. Amalgamated with John Avlon, her fellow CNN contributor, on November 7, 2009, after being engaged to each other on November 21, 2008.

Margaret Hoover with her husband at an event

Her relationship seems happy with him and they also have their bond of love i.e their child, Jack who was born on August 14, 2013.

Margaret and John with their baby

They Are Together Almost All of The Time

It seems as though she is very fond of her husband because she is found complimenting him and his looks too.

They have never seemed to have fallen into complications or controversies which strongly gives an idea about how happy they are together.

For a couple that lives together, works together almost all the time, it might be quite overwhelming to have each other by their sides almost everytime and they might feel the need of space, but from what we can see, this case is quite different when it comes to this couple.

John looks Lovingly at his wife while she speaks

They are just really happy with each other and enjoy each other’s company whether it is for a dinner party or a press conference for work. And not only this, these two share more of common interests like writing, working for Gay people’s right and much more.

Seven years ago today we said yes to a lifetime of adventure, fun & love. Happy Anniversary to the love of my life @johnavlon

This couple also loves taking selfies because Hoover’s Instagram is loaded with their selfies and also with cute photos of their son.

It's #electionday2016 in America! Makes me tear up every time. Toula & I voting.

Margaret really loves posting her happiness with her 2 boys in the form of photos.

They Are Living Happily

So, with all the pieces of information, it would not be too much cliche to say that this couple a happily married couple and they keep motivating each other.

Margaret and John on their wedding

They are also proud of each other being in each other's lives and let everyone know how lucky they are to have each other.