Camila Cabello and Boyfriend Matthew Hussey Fly Out of LA Together

Camila Cabello boarded a plane out of LA on Tuesday alongside boyfriend Matthew Hussey. The duo was seen smiling and happy with each other while they walked to the airport.

Camila Cabello and boyfriend Matthew Hussey made their way into LAX Airport for a flight out of town on Tuesday, February 12, 2019, in Los Angeles.

The duo held hands checking in into the airport rocking casual and comfortable outfits. Cabello, however, didn't lag behind in her fashion sense with black skinny jeans, a black hoodie and a black and blue cropped jacket. She also complimented her style with a pair of black leather pointed boots and on top of that, a pair of dark sunglasses provided her with the classic chic look. 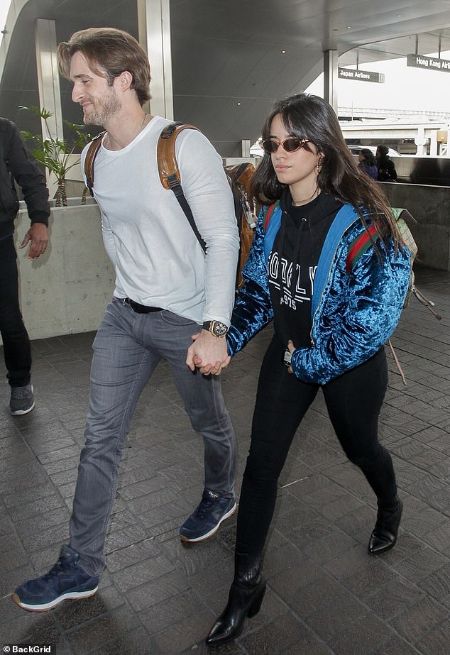 Camila Cabello and boyfriend made their way to the airport on Tuesday
SOURCE: Daily Mail

Nonetheless, Hussey decided to look stylish with fitted grey denim jeans, a white long-sleeve t-shirt along with a pair of dark sneakers. He is a famous dating coach and YouTube personality. He added elegance to the casual look with a non-stop smile on his face till they entered the departing gate.

The couple, who have been dating for about a year were spotted to be very happy in each other's presence. The duo just couldn't hide the intensity of the happiness they were feeling in each other's company as they walked through the cameras to board their plane.

Camila was in town for the Grammy Awards held on Sunday Feb10, 2019. During the event, she wore an elegant Armani dress and apparently the brand made a contribution in her name to aid Save the Children. The singer put on an astounding opening performance for the 61st Acadamy Awards.

thank you @Armani for making me this dress, and for standing with me to support @savethechildren by making a donation last night  @savethechildren works to ensure kids in the US and around the world grow up healthy, educated, and safe and im so passionate about the work they do !!! Also @doradberad and @karlawelchstylist for joining my advocacy at the Grammys really feels good to bring it back to what’s important on a night like this #grammys2019

Cabello's powerful performance of her hit song Havana at the Grammys was one of the best on the award ceremony. She maintained an astounding stage presence during her performance. High profile artists like Ricky Martin and J Balvin joined her on the stage during the performance.

She Told Ryan Seacrest before the show,

The performance is based on my grandma's childhood

The former Fifth Harmony band member was up for a couple of titles in the Grammys this year. She got nominated for the best pop vocal album for her self-titled debut solo record and best pop solo performance for her performance of Havana. She didn't bag any of them though.