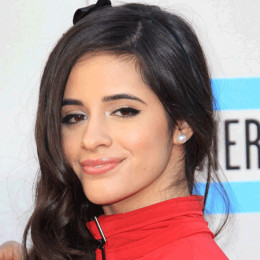 Camila Cabello is a pop singer, who is widely famous as a member of girl group Fifth Harmony, where she sings alongside Ally Brooke, Normani Hamilton, Lauren Jauregui and Dinah-Jane Hansen. Her birth name is Karla Camila Cabello Estrabao. She rose to fame after appearing as a contestant in The X Factor, where she finished at top 3. She was born to a Mexican father and Cuban mother.

Camilla Cabello is straight when it comes to her sexuality. Till now she hasn't married anyone as she is just 18 years old and she is too young for this.

The star was romantically linked with a Canadian singer Shawn Mendes, but none of them confirmed about their relationship.

one of the most gorgeous experiences I’ve ever had. the desert to me was something mystical and almost not real, something I saw in movies but my brain didn’t register as a real place, almost like when you see insane places that look like paintings on planet earth - we got to ride on the dunes and then stay overnight, I woke up to go to the bathroom at 3 and saw stars like I’ve never seen in my life!!! I woke up to all kinds of birds chirping at 4 am - there is something so healing about waking up like that. No TV, no electrical devices, no people - waking up hearing the sounds of the birds, waking up at the same time - made everything feel so simple and uncomplicated

She made her relationship debut with Matthew Hussey at Vanity Fair Oscar Party on 24th February 2019. The couple made their relationship official posing in front of the camera for the very first time.

The pop star met Hussey, a British dating coach on the set of NBC's Today in September 2017. They maintained their affair low profiled ever since.

Cabello broke up with her ex-boyfriend, Hussey just some days after she debuted her hot and heavy music video with Shawn Mendes. Due to which fans speculated that she might be dating Mendes. They, however, have not confirmed yet.

She amassed a net worth of about $12 million as of 2019. She makes the net worth from her singing career.

The star has a house in Hollywood Hills that worth around $3.38 million. She also owns another house in Los Angeles.

She rose to prominence being a member of the girl group Fifth Harmony.

She worked with Machine Gun Kelly in Bad Things and Shawn Mendes in I Know What You Did Last Summer.

Her debut single studio album Camila peaked at no.1 on the Billboard 200 chart. It's lead single "Havana" topped the chart in many countries.

To know more stay on marriedwiki.com.