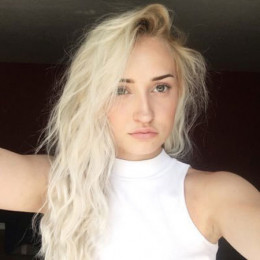 American You Tuber, Samantha Eklund rose to fame from her self-titled YouTube channel where she posts video content related to make up, haul, and fashion. Eklund also has an account in depop (a new way to shop). Eklund is currently dating her YouTuber boyfriend, Cody Herbinko.

Samantha Eklund was born on 7th July 2000 in the United States of America under the birth sign Cancer. She is American as per nationality and belongs to White-American ethnicity.

Samantha Eklund started her YouTube career in 2016, creating the channel, samxeklund. She posted her first video on 25th June 2016, FIRST VIDEO | Sam Eklund which earned over 7k views. Eklund due some issues in her first channel created a self-titled channel as her main.

In 2017, Eklund posted a video make an announcement about her depop (a new way to shop) account. As of February 2018, Eklund has over 9k subscribers on her channel.

Samantha Eklund is unmarried. Eklund is currently dating her You Tuber boyfriend, Cody Hebinko. The pair started dating in 2015. Hebinko also has a great fan following on his channel. The pair also often feature on each other's video.

Back in 2016, it was rumored that Eklund’s boyfriend was cheating on her and was taking advantage of young girls. Later, the couple claimed that the buzz was fake.

Eklund has an estimated net worth which according to sources is assumed to be not less than a six digit figure. She earned a good amount from her YouTube career.

She uses various brands, Puma, Prada, Louis Vuitton, and Sephora among others.

Below, the vide is about Samantha Eklund's Question and Answer video: