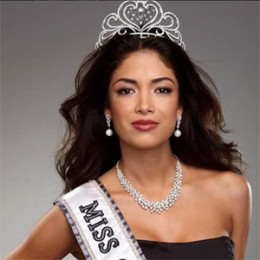 Nichole Michele Johnson, better known as Nicole Johnson, is an American model. She is a beauty queen who was Miss California USA 2010 and competed in the Miss USA pageant. She also worked for local Pacifica Centers for Children and families, and now, she serves as the volunteer marketing manager for the Michael Phelps Foundation. Currently, she is in a marital relationship with Michael Phelps and is blessed with a baby boy, Boomer Robert Phelps and going to parents for the second time.

Nicole Johnson born on 12th July 1985 in the Colorado Springs, Colorado is a daughter of teacher and pharmaceutical sales manager. Though she was born in Colorado Springs, she grew up in Pennsylvania and moved to Westlake Village, California.

She attended Westlake High School and graduated in 2003. From childhood, she was passionate about modeling and wanted to pursue her career in the related field.

At the age of 17, she read an advertisement in the Thousand Oaks Acorn for Miss California Teenager. Later she attended Moorpark College but Johnson transferred to the University of Southern California through the scholarship would help pay her education.

In 2007, she completed her degree in communication, concentration in sports and entertainment from the University of Southern California. The year, she participated in the Miss California Teenager where she was the first runner-up in the 2007 pageant out of 304 contestants.

Initially, she worked in sports entertainment and as a production assistant for the ESPN ESPY Awards. She even used to work for Mercedes Benz and for the restaurant loyalty program, MOGL and was also a communications director for Yellow Pages (YP).

Unfortunately, she placed ninth in the competition though she was one of the favorites to win the title during the contest.

Moreover, she worked for the local Casa Pacifica Centers for Children and families that work with children with an unstable home and who face abuse and neglect. She also serves as the volunteer marketing manager for the Michael Phelps Foundation and provides swimming lessons to kids from underprivileged background.

Nicole is married to Michael Phelps after dating several years. The husband and wife first met at the 2007 ESPY Awards and started dating since 2009. After dating few year, they broke up before the 2012 Summer Olympics and reunited again in 2014.

The couple exchanged vows in a private ceremony on 13th June 2016 after their first baby boy, Boomer Robert Phelps on 5th May 2016. They have even shared their wedding ceremony in a Facebook Live video as well.

According to the sources, Nicole announced through her Instagram that the couple is expecting their second child on Tuesday 20th August 2017.

Nicole along with her husband, Michael has an estimated net worth of around $55 million as of 2017. Now, she lives in the lavish marvelous Baltimore, Maryland, USA mansion which current value in around $1.69 million.

Her husband, Michael is passionate about cars and has got a different collection of cars in their garage. They own cars including Cadillac Escalade, Mercedes-Benz SL63, BMW 760 Li, Range Rover and few other.

Born on 5th May 2016, Boomer Robert Phelps is the elder son of Michael Philps and Nicole Johnson. Soon he will be the caring brother of newly born baby from his parents.