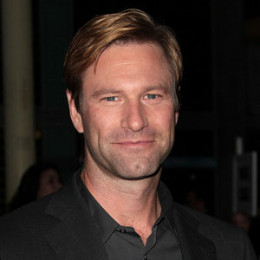 An American film and stage actor who is better known for his role as Harvey Dent, also known as Two Face, in The Dark Knight. When he was just 3 years old he moved to England with his family. In 1994 he completed his graduation Bachelor of Fine Arts degree in film from Brigham Young University. He debuted in the film industry in 1993 in the role of Ken Reynolds in the film, Slaughter of the Innocents. In 1997 he played the role of sociopath ladies' man in LaBute's black comedy movie named "In the Company of Men". Olympus Has Fallen, The Pledge, Rabbit Hole, Your Friends & Neighbors, Nurse Betty, and Possession are some of the popular movie he has starred on. He was awarded with Golden Globe nomination for his role as Nick Naylor in the movie named Thank You for Smoking.

Aaron Eckhart was previously engaged to an actress, Emily Cline with whom he met on the set of ‘In the Company of Men’ but the couple separated in 1998. Later, he was linked to Ashley Wick.

Similarly, in 2009, Aaron dated actress, Molly Sims. Due to some issues, the couple broke up. As of now, the actor is not married and is not dating anyone. So, he might be possibly single.

Besides, the actor is often considered as shy and has always been reserved about speaking about his relationship.

Aaron Eckhart has an accumulated net worth of $25 million. Eckhart makes an impressive net worth from his acting career.