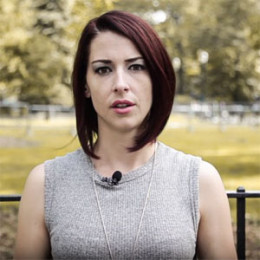 American journalist, Abby Martin is currently working as a presenter of The Empire Files on teleSUR network. Martin also worked as a host in different programs in TV and radio. She hosts her own show called, Breaking the Set in RT America. Martin is currently in a relationship with her journalist boyfriend and yet to marry.

Abby Martin was born Abigail Suzanne Martin on 6th September 1984 in Oakland, California. Martin is American by nationality and is of White ethnicity. She grew up along with her sibling Robbie Martin.

She finished her schooling in 2002 at Amador Valley High School. Later, Martin earned a bachelor’s degree in Political Science from the San Diego University.

Abby Martin developed her interest in journalism while in college when her then-boyfriend was enlisted in the military after the 11th September 2011 attack. In 2004, she got engaged in the John Kerry’s presidential campaign and became the supporter of the 9/11 Truth movement.

In 2009, she established an organization Media Roots, a platform for the citizen journalism. During the Occupy Wall Street movement, Martin covered the Occupy Oakland in California as an independent journalist.

In 2012 she moved to Washington D.C. and joined RT America, a TV channel as a correspondent. From September 2012, Martin began to host her own show called, Breaking the Set where she mixed media critics with the investigative journalism.

In 2015, Martin launched a news program, The Empire Files produced by Michael Prysner, an activist. Telesur or teleSUR, a socialist and satellite TV network broadcasted her show.

Abby Martin is in a committed relationship with her boyfriend, Mike Prysner, also a journalist and a social activist like her. Martin made her relationship public via her social media by posting a cozy picture together.

Martin has interest in graphic arts and photography. She also enjoys painting about nature, psychedelia, and politics. As per Jeremy Koss, Martin is, "vibrant, artistic and outspoken."

In 2015, Martin got threats of rape and death from Chris Kyle fans after she posted a picture wearing a T-shirt that read, F**K Chris Kyle. After the threats, she tweeted saying,

‘’ Time to put on our raping shoes & find this bitch.’’ I hope ISIS cuts your clit off w/ a dull knife.

Martin has a bold attitude and is never afraid to speak her mind.

Abby Martin, 33, is currently working on her show, The Empire Files. She worked in RT American as a correspondent earning $47k-$63k annually.

Besides this, she also appeared as a director and actor in some of the documentaries and short movie like Project Censored The Movie: Ending the Reign of Junk Food News and 99%: The Occupy Wall Street Collaborative Film.

Apart from this, she also has her own YouTube channel named, Empire Files which has more than 68k subscribers. Considering her sources, Abby Martin must have an estimated net worth of seven-digit number.