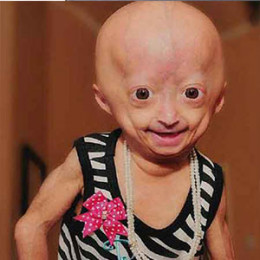 Social media phenomenon and inspiring young girl Adalia Rose has become a complete source of inspiration for people all around the world. She lives with progeria syndrome. It is a rare genetic condition that causes early ageing in an individual. She says she loves to be like other kids, she says, 'I wish I was taller, I wish I had hair, I wish I looked like everybody else, I wish I could do what everybody else can do' but one barely has what she garnered at an early age.

Progeria is a rare aging condition affecting less than 500 people all around the world? Social media star Adalia Rose who lives with progeria syndrome is still alive and healthy usual despite the chronic disease. Though, the average lifespan for he progeria is 13 and rarely exists up to 15 years of age. Adalia shows no symptoms of sickness at the moment.

Notably, Adalia, the superstar has been practicing maths with her sibling during coronavirus pandemic. The internet sensation too a video of herself enjoying with her mother and the caption reads, "We really are bored" on April 3, 2020.

In the same vein, Rose shared her tiktok dance video titled "coronavirus' on April 1 of the same year. She writes "Hope everyone is staying home safe and healthy". As of mid-2020, Adalia amassed over 2.53 million subscribers on YouTube and 339k followers on Instagram.

The 12-year-old self-confessed "diva" has now become an internet superstar and has a huge fan base. Despite her serious genetic syndrome, she's relishing the best days of her life with her family members.

Rose's mother, Natalia Pallante, 29 revealed that she looked a one-month-old baby when she was born and she was not so happy with her growth.

"That was one of the symptoms that first popped up and then it was also that the skin on her tummy was really tight and just different looking."

When she became three months old, she was diagnosed with Hutchinson — Gilford progeria syndrome. Natalia was a single mom when she gave birth to Rose so she felt helpless at the moment.

My mommy and daddy @pallantetribe

Her stepfather Ryan Pallante is also very supportive of their darling daughter. He is so excited to see a 12-year-old is gaining huge popularity and love from her fans.

"We don't even really say the word 'progeria' very often, we just treat her like a normal 11-year-old and try to give her the best life."

"But then she'll be like 'Who needs hair anyways, I have a bunch of wigs, I can have different hair every day'."

She has three brothers in the family everyone loves her so much keeping her syndrome apart. Rose loves posting videos of her singing and dancing on YouTube and Instagram.

She often posts videos of her DIY make up with her mother. Videos of her dancing to Psy's Gangnam Style and Vanilla Ice went viral with millions of views on YouTube.

What is Adalia Rose's Net worth?

It's really difficult to believe that such a small girl like Rose earns an attractive sum from her social media posts. She earns about $866.25-$1,443.75 per Instagram post. Adalia received $1000 from Laurie on 19 December 2019.

We were playing WWE 2K18 lol AND I WAS WINNING do you guys play any games?

She has more than 2 million subscribers on her self-named YouTube channel and earns more than $10,000 from each of her videos.

Researchers reported that progeria is caused by a mutation of a gene called LMNA. In addition to premature aging, one suffers from dwarfism, hair loss, visible veins, lack of body fat and muscle, stiffness in joints and a high pitched voice.

I look so good

The average life expectancy of a child suffering from the condition is 13 years old. Despite all obstacles, Adalia is living her life as a princess and admits that she can be a bit of a diva.

Adalia is still alive and she's recently shared a video of her visiting Disneyland with her friends and family on 20 December 2019. She enjoyed a rollercoaster ride with her mom and dad.

Adalia Rose was born on 10 December 2006 in Round Rock, Texas under the birth sign Sagittarius. She has three brothers Marcelo, Niko and Emiliano. As of December 2019, she is thirteen years of age. Despite having a genetic disorder, Adalia is a proud daughter of a mother, Natalia, and step-father, Ryan Pallante.

Speaking of hobbies, Rose likes to play barbies, put on make-ups, play on a phone, watch videos. In the meantime, this social media star prefers to spend quality time with her brothers. One of her most favorite things is Unicorns; she finds them pretty and sparkly.