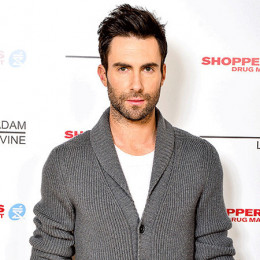 Adam Noah Levine is a singer, songwriter, multi-instrumentalist and occasional actor, best known as the main vocalist of pop rock band Maroon 5. He is the son of Fred Levine, founder of retail chain M. Fredric and Patsy Levine, an admissions counselor. His parents divorced when he was seven. Being associated with the band Maroon 5, he has won 3 Grammy, 2 Billboard Music and American Music Awards and one MTV Video Music and World Music Award.

Talking about his personal life, he is now married to his long time dated girlfriend. The couple is together from a long time and they have a great bonding and mutual understanding among each other. Till now there is no record of his children. As he is so popular and handsome, he has been through lots of dates and breakups in his past days, but these days he has stayed completely loyal towards his wife.

She is a Namibian model, best known as Victoria's Secret Angel. They were married in presence of various popular faces in Cabo San Lucas, Mexico.