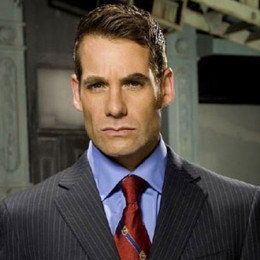 An American actor, voice artist, and film director who is better known for playing the character of Jim Profit, in Profit. He is son to Homayoon Pasdar and Rosemarie. He completed his graduation from Marple Newtown Senior High School in Newtown Square. He received football scholarship from the University of Florida but his career in sports was sidelined by a severe car accident. He started his career by taking a job with a theater group named People's Light and Theatre Company but he again got in a severe accident which had him cut off the end of his left thumb. He was offered the role of police officer in the Dixie Chicks video song "Goodbye Earl" which won video of the Year Awards in 2000. He has starred in movies like Solarbabies, Streets of Gold and Near Dark. He has also made guest appearance as Gabrielle Solis's sleazy lawyer in Desperate Housewives.

Exploring his personal life, he tied the knot with his longtime girlfriend turned wife Natalie Maines. He married the band member of Dixie Chicks who offered him the role of a police officer in their music video. Their marriage was performed in Las Vegas's Little White Wedding Chapel. Together they are parents of two beautiful children. Since he was married with two kids he is not gay or the rumor regarding his sexuality as gay is only a hoax. Their marriage couldn't last forever when Natalie filed for divorce in 2017.

Professionally she is a singer and band member of Dixie Chicks. They first met each other while she was the bride's maid to her band mate. Together they are parents of two boys.

He is the eldest son of the family. He weighed 6 lbs and was 20 inches long when he was born.

He is the youngest son. He weighed 7 lbs, 7 oz when he was born.