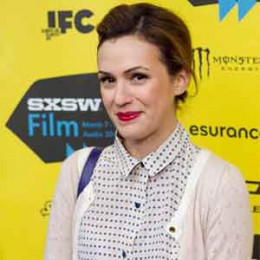 Born and raised in Austin, Texas, Adriene Mishler is an actress and fitness expert. She is popularly known for her Yoga website, "Yoga With Adriene". She also co-founded the online library of Yoga materials called "Find What Feels Good". Mishler is immensely popular on YouTube as well, she has more than 4.2 million+ subscribers on her YouTube channel "Yoga With Adriene" along with 337 million+ views.

Adriene Mishler shares amazing chemistry with her partner to be. Although the name of her special someone is not mentioned yet, she often talked about her love affair in various interviews and talk shows. Is she dating someone?

Well, it won't be surprised if to say the Yoga Guru has already been in an intimate relationship with her long-term boyfriend, whose identity is still a mystery. Due to her secretive nature, Mishler prefers to keep her personal life lowkey especially when it comes to her dating life.

In an interview with "Get to know your Yogi", Mishler mentioned she does have a boyfriend. When she was asked about the song she's listened to often, Adriene replied, it's Bob Dylan's "You Aint goin' nowhere"

Mishler's lover often sings that song to her while playing guitar. Listening to her choice, we can easily guess that she is not married yet. The yoga guru gave a clue she is in relation and they'd gone for a "date night".

The fitness enthusiast hints her lover is probably someone she is waiting to get united as a life partner. However, Mishler was in a relationship with a mysterious guy with whom she broke up around 2013 after she had to end her vocal career following her surgery.

Mishler could be secretly dating a man. In fact, Mishler often shares pictures of a man by cropping his face. Needless to mention, Mishler is not ready to talk about her relationship with her fans.

Similarly, Mishler earned $1,225.5-$2,042.5 per her Instagram post. Through a successful career as well as her part-time acting, she is living a very luxurious and happy life.

Adriene Mishler is a part-time actor and a full-time yoga teacher. At the age of 19, after finishing her yoga training, she enrolled in teaching yoga to adults and children in several studios. Later she co-founded an online library for Yoga and Yoga Lifestyle called "Find What Feels Good." 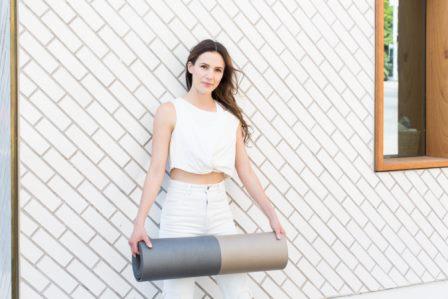 Mishler rose to fame with her successful online yoga community named "Yoga With Adriene which ranked #1 in the category of most searched workout site of 2015 by Google. It also won the 2016 Streamy Award.

In 2012, Mishler started her YouTube channel with the same name, Yoga With Adriene where she creates free creative content to inspire people of all shapes and sizes to connect to their bodies daily. As of 2018, she has more than 4.2 million+ subscribers along with over 337 million views.

Apart from her regular job as a yoga instructor, Mishler is also an actress and has worked in various films, commercials, and voiceovers. She started her acting career in 2005 in a small role in Fall to Grace. Then she appeared in the 2011 TV series, Friday Night Lights. Some of her notable acting credit includes Z and Beau, Days of Delusion, Austin High, A Day Without Roses and others.

As of now, Mishler seems more focused on her youtube videos, posting a new workout video every week than her acting career.

Adriene Mishler was born on September 29th, 1984, in Austin, Texas USA to Melba Martinez and Rick Ray Wilson Mishler. As a matter of fact, ever since she was young, she was a dancer and also enrolled in gymnastics and theatre arts.

According to her bio, Mishler grew up in theatres and started acting and performing from a small age. Although no information about her education has been made public. Adriene spent her early days performing in the theatre and has been acting.

The 5' 6" tall beauty taught yoga at salvage vanguard theater in Austin Texas. Or even better, she frequently contributes to magazines and blogs and voices several characters in DC Universe Online.

Adriene Mishler seems to enjoy traveling and prefers a vegetarian diet. She also seems to be a dog person as she can be seen taking pictures with her dog and posting it on her social media.

Mishler is an avid Instagram user, as of 2021, she has 2.1 million followers and over 72k followers on Twitter. And, fans can expect to see plenty of Mishler's dog Benji on her Instagram and YouTube Yoga video both.

Adriene Mishler stands at an impressive height of 5 feet 6 inches (167 cm). She has an average body weight. Mishler being a fitness instructor, it is obvious that her body would be slim and well maintained. She has got an appealing body curve that attracts many men and women so she has a wide number of fans and followers.

Check out the popular yoga video of Adriene Mishler;

For more updates, stay on MarriedWiki.com!