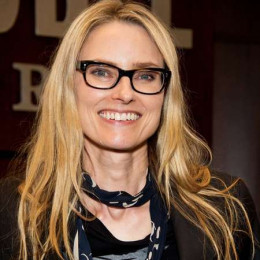 An American singer-songwriter, rock singer, bassist and guitarist Aimee Mann who is better known as a member of the band 'Til Tuesday in the 1980s. She completed her high school from Open High School in Richmond. After a year of joining Berklee College of Music in Boston, she dropped out of the college and joined Boston punk band The Young Snakes. The band debuted their first song Bark Along with The Young Snakes in 1983. She is also the co-founder of the new wave band 'Til Tuesday. Their title song Voices Carry was able to win MTV Video Music Award for Best New Artist. In 1998 she starred in movie named The Big Lebowski as a German nihilist. In 2012 she released her album Charmer which includes a duet song with James Mercer of "The Shins".

Exploring her personal life she is a married woman. She is married to her longtime boyfriend Michael Penn who is also a singer in 1997. He is the actor of Chris Penn and Sean Penn.

I did this deep-dive interview with @dougbleggi for #Stereogum and he was super nice, and I’m too dumb to post a link in bio but LOOK AT THIS PIC OMG!

Before marrying him, she had dated her boyfriend David Gregory who was also her band member. She has no children from her marriage but has one stepson from her husband previous relationship.

She was born on 8 September 1960 in Richmond, Virginia.

She recorded songs for the movie 'Magnolia' which received Academy Award and Grammy Award nominations for the song "Save Me".

In 2006, she was named as one of the world's ten greatest living songwriters by NPR.

In 2013 she was all over headlines after she accused MediaNet Digital Inc. claiming they were distributing 120 of her songs through their agreement was expired and she demanded $18 million for it. Later the case was dropped.

They first met each other during the recording of her album I'm with Stupid. After first meeting they fall in love with each other and started dating and finally got married too.