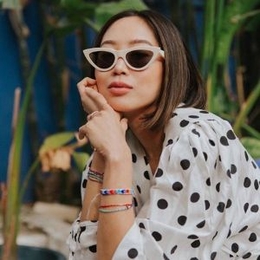 In today's world, the Internet is one of the most powerful media to showcase the talent and pursue their dream. Korean-American Fashion blogger Aimee Song was interested in fashion from a young age, and when she became a adult, she used the online platform to share her fashion sense to the world. Luckily for her, people loved her style, and she became one of the well-known faces in the fashion community.

Is Aimee Song and Boyfriend Jacopo Moschin Planning A Wedding?

If you are a fan of fashion blogger Aimee Song and follow her on social media, then you must be familiar with her boyfriend of five years, Jacopo Moschin. He is a Milan-born photographer whom she met in 2015 while she was in Morocco on a business trip.

After returning from Morocco, Aimee and Moschin remained in touch and later started dating. At first, it looked like the affair will not last long as the Instagram star is based in Los Angeles, California, whereas Moschin worked from New York.

Aimee Song is in a relationship with Jacopo Moschin for the past five years. SOURCE: Aimee Song Instagram(@aimeesong)

However, as time passed on, it became clear that the relationship between Song and her boyfriend is not a fling, and they are in together for a long haul. So, how did the couple maintained their romance despite the distance of hundreds of miles?

Well, one of the main reasons is that Aimee and her beau are continuously traveling because of work. Thus, most of the time, they meet each other in a foreign setting. Also, when they are in the United States, they tend to make sure that they visit one another at least once in two-three weeks. In their relationship of five years, the longest time they have been separated is three and a half weeks.

If you are wondering, all these techniques are well and good, but these are all solutions for the short term. What about the future? Will they ever move in together or tie the knot?

Check out the video where Aimee and her boyfriend discuss the wedding and moving together.

Sadly, it looks like Song and her boyfriend is more than happy with their long-distance relationship. The couple, when appeared in the video titled Reacting To Your Assumptions About Me with Jacopo Moschino back on March 27, 2019, revealed that they have no plan to marry anytime soon. Furthermore, they stated the love for their respective cities and indicated that they are in no hurry to relocate to another place.

Dated Wesley Mason In Past

This is not the first time Aimee Song has been in a long term relationship. In the past, she dated photographer Wesley Mason for a couple of years as well. 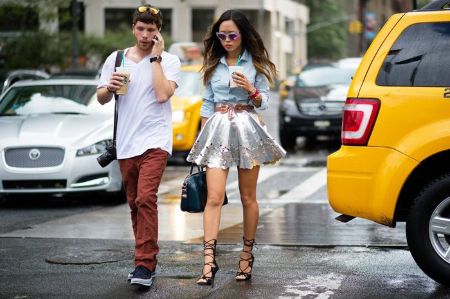 When Song and Wesley were dating back in the early 2010s, often fans labeled them as a match made in digital heaven. He was a talented photographer and graphic artist, and she was a fashion blogger. They used to collaborate and create beautiful photographs together frequently.

Song was diagnosed with a benign tumor on her ankle in January 2020. The doctors advised for instant removal of cancer through surgery. However, because of her travel plans and work commitment, she postponed it.

However, after attending New York Fashion Week, the internet personality finally decided to do surgery. She thought the operation will be small and will recover in a week. Sadly that was not the case. 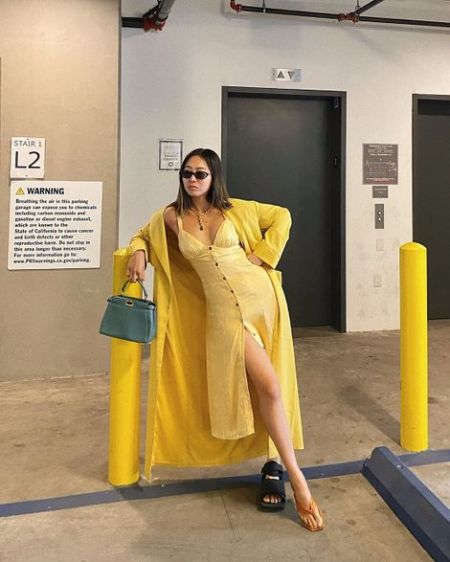 After going into surgery, the doctors realized that the tumor has spread to a broader area. Thus, instead of a small incision, the surgeon needed to go much deeper, which left her with a big wound to heal. Because of this, she missed the Paris Fashion Week for the first time in years.

During the time of recovery, the fashionista was forced to use crutches and wear ankle support boot. Thankfully, she was able to let off crutches in the last week of February 2020.

Aimee Song's Net-Worth Is In Millions

The 33-year-old fashion blogger and fashion designer boast a total net worth of $3 million. She earned this fortune from her decade long work in the fashion industry.

Founder of the blog 'Song of Style'

Song began blogging in 2008 when she was still studying Interior Architecture in college. At first, she focused on interiors; however, she quickly changed it to a personal style blog and started sharing about things she loved like lifestyle, travel, and, most of all, fashion. 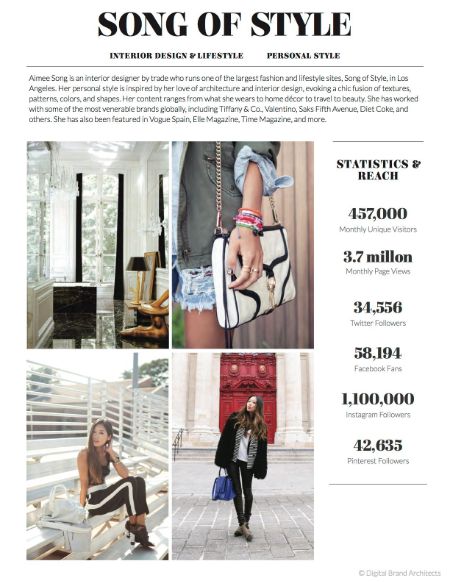 Aimee Song is the founder of the blogging site 'Song of Style.' SOURCE: Chic Darling

Fans loved her fashion style, and slowly her fanbase started growing. At present, her blog receives over 2 million page views per month.

Soon after getting some recognition from her blog, Aimee joined Instagram. There she posted her everyday looks as well as personal pictures from her travels. Because of her candid nature, her popularity on Instagram exploded. As of February 2020, she has over 5.5 million followers. 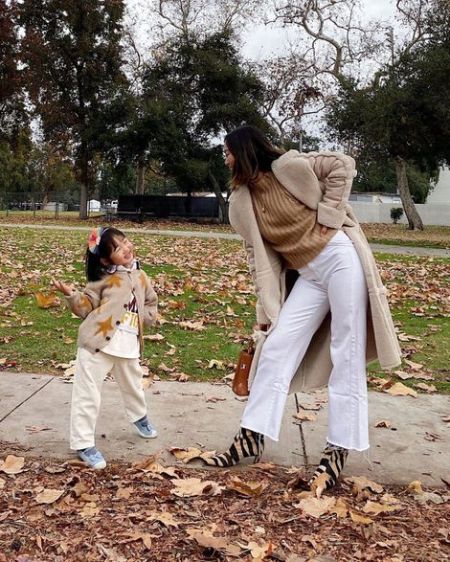 Song did not receive instant sucess in this streaming site like that of Instagram; however, she was able to make a niche audience for herself. As of February 2020, she has 345,000 subscribers and 25 million views.

These online platform has not only increased Aimee's popularity but also her income as well. From all her social media accounts, she earns good revenue. The online website Izea in 2018 reported that she receives, on average, $9,000 per sponsored Instagram post. Similarly, she earns $962-$15,400  per year from her YouTube channel.

Aimee, after establishing herself as a fashion stylist, then moved to design. Capitalizing on her already established brand name Song of Style, she opened a jewelry line of the same.

The line is still active; however, instead of selling bracelets in gold and semi-precious stones, it currently focuses more on clothing items like Sweaters & Knits, Tops, Leather, etc. On average, an item from the brand costs $150. 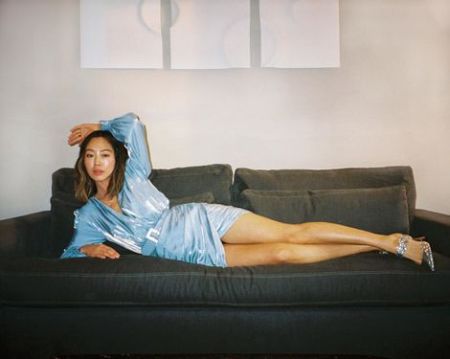 In addition to that, the entrepreneur has also collaborated with brands such as True Religion, Levi, and Revolve for various collections.

Aimee and her sister Dani Song are the owners of a apparel brand named Two Songs. It mostly features Californian street style-inspired t-shirts and sweatshirts. In addition to that, another critical aspect of this brand is that it is charity-focused. 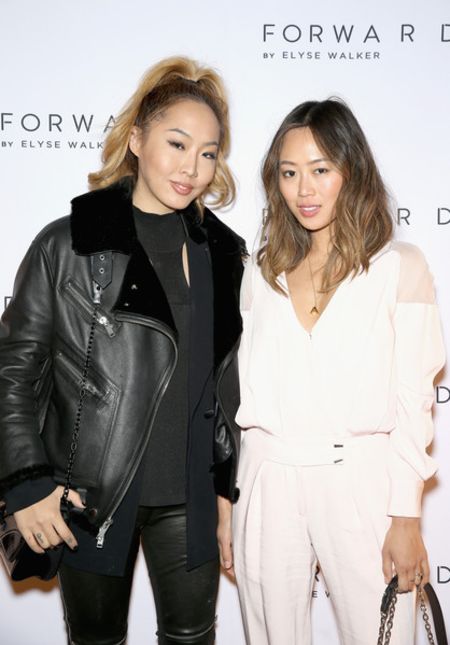 Through this company, the siblings created a Rose Tits Tee and sent 50 percent of the proceed to the National Breast Cancer Foundation. Later they also created Love Wins Tee that donated to The Trevor Project.

As of February 2020, Aimee has penned two books, namely Capture Your Style and Aimee Song: World of Style. Her first book was released in 2016 and become the New York Times best-seller.

Furthermore, the book became so popular; it was printed in multiple languages, including Russian, Thai, and German. At present, the book is available on Amazon in both paperback and Kindle version. The paperback costs $10.69, and Kindle costs $9.99. 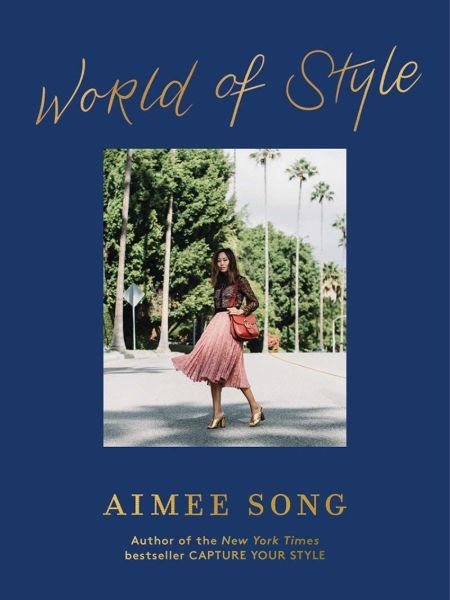 Aimee Song is the author of two books. SOURCE: Amazon.com

Song's second book published in 2018 and features more than five hundred of her all-time favorite looks from around the world. It is also available on Amazon. The hardcover costs $3.07, and the kindle version costs $2.84.

Living A Luxurious Life With All Her Wealth

Song bought a 1920's house in Los Angeles and renovated herself. After the renovation, the house features a master bedroom, guest room, guest bathroom, and a kitchen. Also, it features one main closet and a accessories closet. 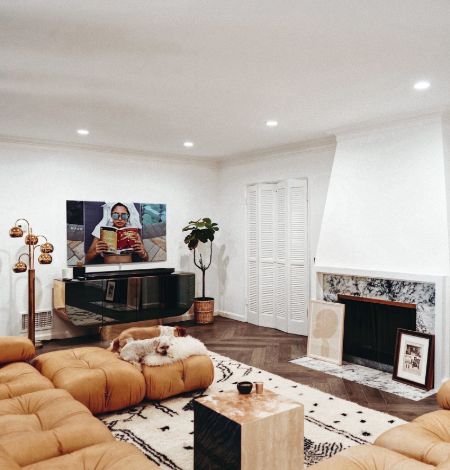 Aimee Song decorated her house with pieces she bought during her travels. SOURCE: Pinterest