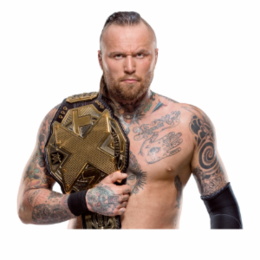 A one-time NXT Champion, Tom Budgen, who is renowned by his ring name Aleister Black is a Dutch professional wrestler. Besides, he fought under the ring name Tommy End before signing to WWE. Furthermore, he is also referred to as the next Undertaker or WWE legend.

Aleister Black is the heartthrob of many girls; however, here's sad news for them. The 34 years old hunk is no more single. He is in a conjugal relationship with his girlfriend-turned wife, fellow wrestler. Are you wondering who she is? 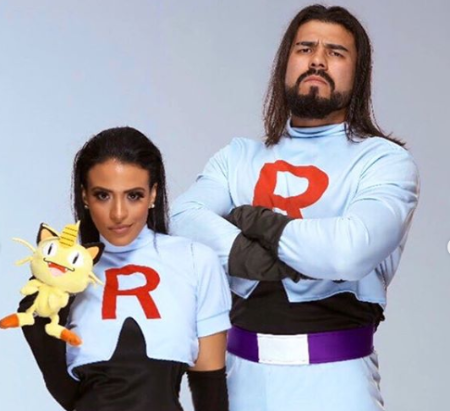 Well, she is none other than Zelina Vega, an American professional wrestler, actress, as well as a professional wrestling manager. Black and Vega never officially admitted to be dating; instead, the couple gave a shock to their fans by getting married.

The pair were first seen together on the screen in an NTX Championship angle between Andrade Cien Almas and Black. Further, the rumors of their relationship began to rise after Vega slapped Black in an episode of NTX.

Likewise, the speculation of their affair grew after Vega shared a video of them on her Instagram. On the video, Aleister and Vega were seen training together. 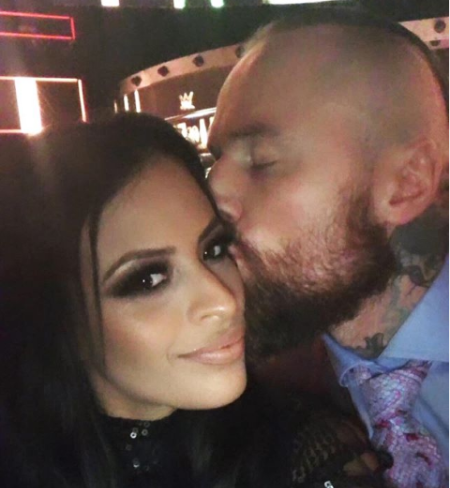 People and online tabloids often claimed the duo to be dating; however, neither black nor Zelina confirmed to be dating in real life. Both of them always remained mun regarding their affair.

Later in 2018, the news of their wedding surfaced on the internet. Several online tabloids, as well as their fans, claimed that the pair have married. Nevertheless, this time as well, the pair remained silent and did not say even a single word about the topic. 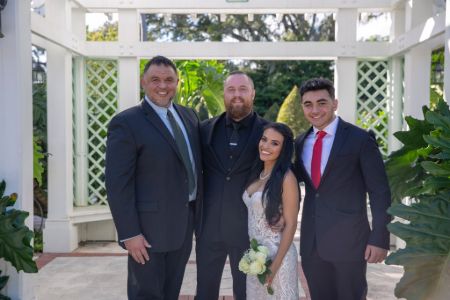 The news of their wedlock was confirmed on 20th February 2019 after David Herro, who officiated their nuptials, posted photos of the special day. He congratulated the couple via Tweet writing;

"Since the secret is out... Pretty freakin sweet to see two of my favorite people on #SDLive .... #AleisterBlack @Zelina_VegaWWE #WWE #Raw #WrestleMania #NXT."

From then onwards, the WWE superstar couple also openly began to share pictures of each other on their respective social accounts. They also shared photos of their wedlock on their Instagram accounts. 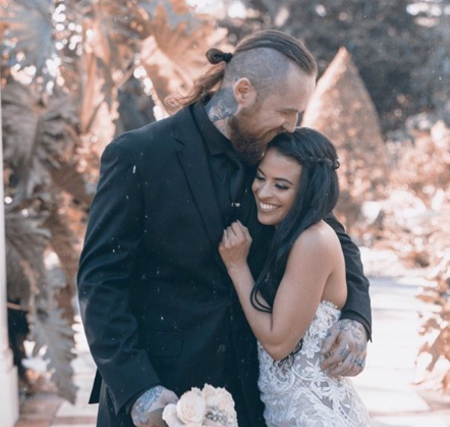 As of now, the husband and wife are happily enjoying their married life without facing any conflicts which could ruin their happy conjugal life. They are supportive of one another and make frequent public appearances together.

The two further appear together on WWE competitions. Although the duo is already married, they do not have any children yet. Moreover, there are no rumors or news surfaced on the internet about Vega's pregnancy.

Is He Retired From Wrestling?

A rumor surfaced on the internet about the retirement of the WWE superstar Aleister Black. Currently, the wrestler is not seen in any competitions. His absence in the fights made people think about him being retired.

Black's last WWE appearance was on SmackDown Live episode on 16th July 2019. He fought against Cesaro in a rematch and got victory over him. It was a hard-fought battle. However, ever since his cometition against Cesaro, Black has no more appeared in any matches.

So far, Aleister hasn't officially announced his retirement. Some sources claim that the wrestler is undergoing recovery from a knee injury. But so far, Black hasn't said anything related to the topic. Further, there is no actual date revealed when he returns to the ring.

His Tattoos And Their Meanings

Former NXT Champion, Aleister Black, has multiple unique tattoos on his body, and they have different meanings. On the upper left side of his torso, he has a tattoo of Yama, who is known as the Hindu God of death and King of Ancestors. 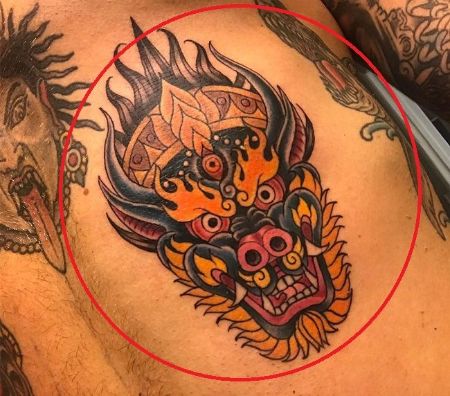 Aleister Black has a tattoo of Yama SOURCE: Instagram (@aleister_black)

Similarly, on the right side of his torso, he has a tattoo of Mahakala, who is the wife of Hindu Goddess Mahakali. He inked it and uploaded a photo on his Instagram with a caption;

“A bit swollen, and a bit of distorted picture to show placement, but here you have it ‘Mahakala’ tattoo by @danielselleck.”

He likewise inked coffin with a tag -RESTLESS on his right foot. In calf muscles of both legs, he has inked a tattoo of Grim Reaper holding a bunch of flowers. On the knuckles of both hands, he was written ANTI HERO. He also as a tattoo of a skull on his lower portion of the right leg. 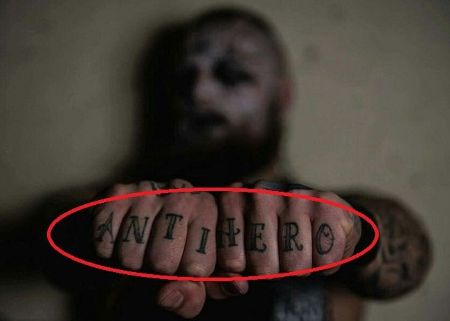 Besides, on the center of his chest, he has inked a tattoo of a Lord Hindu Warrior Goddess, Kali. It has a dark-colored complexion with a blood-stained face. She wears a necklace of human skulls; the tongue is sticking out and has long, messy hair.

The wrestler uploaded the photo on his Instagram account on 30th December 2016, with a caption 'Kali finished by @davedecrom.'

Furthermore, in 2016, he inked a tattoo of Ave Satanas on both hands. Satanists use this language or expression to show their dedication towards Satan. On the left side of his chest, he has a tattoo of Angelic Palm Reader, which he inked in August 2015. 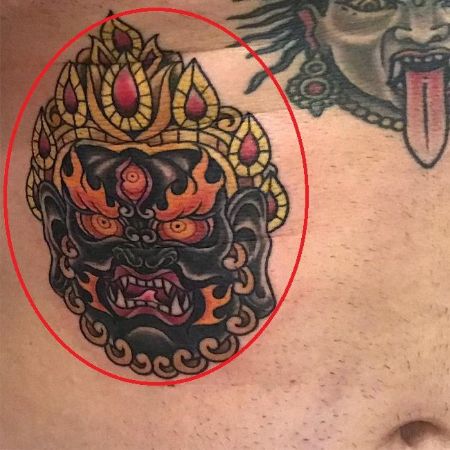 The same year in July, he also inked a tattoo of Dagger on his right knee. Further, a tattoo artist Jonathan Gearheart inked lucifer symbol, the other name of Satan on Black's left hand. Near to it, there is a ‘Ella Fitzgerald Portrait which he got inked from the artist Danielle Rose.

In addition, he has Tiny Red Heart on his right thumb and a Spade on his left thumb, which resembles the symbols of good luck, power, and fearless. His right calf muscle features a satanic animal that he inked in 2016.

Moreover, on his back, he has a large tattoo of a dangerous woman who is sexually wanton and steals babies at night, i.e., Lilith. He shared a picture of it on Instagram and wrote;

“Forgot to take a picture of all the work that got done today, but getting there. Scales on the sides, eyes, crescent moon, extra shading, coloring, and some skin spots that aren’t pictured. By far the most difficult and most painful piece I’ve gotten.” 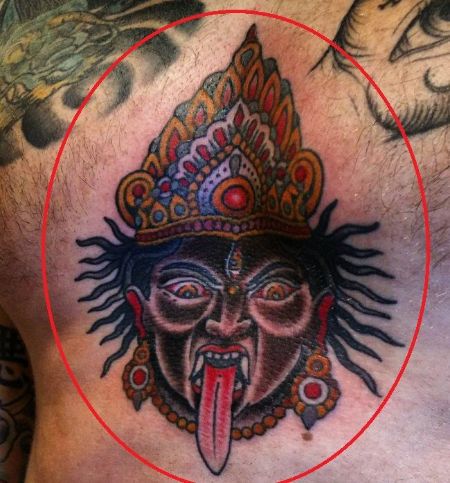 Besides, he has a Possessed Japanese Tiger Head tattoo on his right hand. In the same way, he has inked the symbol of cycles of births and deaths, i.e. Crescent moon. The wrestler is much more obsessed with tattoos as he has inked Anatomical Heart with an Eye on his throat and a Demon Eye on his right wrist.

Furthermore, he also has other tattoos of Contemno, Freemason, Eagle, Symbols of Satanism, Traditional Japanese Dragon, etc. on different parts of his body. Including all, he has got altogether 54 tattoos inked on his body.

What Is His Religion?

WWE superstar, Aleister Black, was born to a Christian family; however, he currently do not follow it. He has inked several tattoos of Hindu goddesses as well as devils in different parts of his body. Because of the tattoos, people think that he follows the Hindu religion. 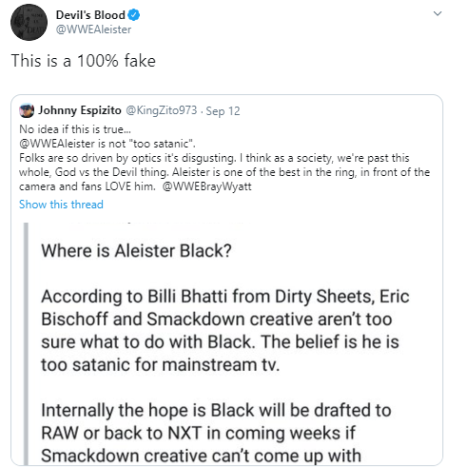 Furthermore, in May 2019, some sources reported that Black wasn't allowed to attend the WWE Super ShowDown event in Saudi Arabia. As per the online tabloids, he was restricted to participate in the event because of his tattoos.

But Black later revealed via a tweet that the news was 100% fake. He also shared a post related to the ban of his tour. However, the fact is, he is neither Christina nor Hindu as he do not follow any religion.

Aleister Black's net worth is $3 million as of 2019. He makes a fruitful income from his career as a wrestler as he competes on WWE.

A professional wrestler in the United States earns a salary of around $500,000 annually, whereas top-wrestlers receive a payroll of around $1 million per annum. Thus, being a pro wrestler, Black probably receives a good salary.

A Dutch professional wrestler, Aleister Black walked down the aisle with his girlfriend Zelina Vega in 2018 in a private ceremony.