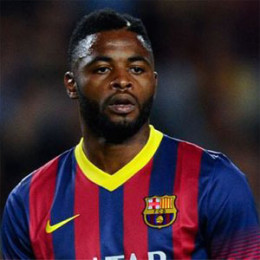 Alex Song is a Cameroonian professional football player playing for the Cameroon National Football Team and also for the English Club Side West Ham United as he is on loan currently from Spanish club FC Barcelona as the central or defensive midfielder wearing jersey number 30. Alex is one of the 28 children in his family having 17 sisters and 10 brothers. He had lost his father when he was three and since then his cousin Rigobert Song, been like a second father to him and been a motivation to choose football as a career.

There is a recent rumor that this football player has been transferred to Man City but no official claim has been made yet. There is no other rumor available on him. He is a married man. He got married at the age of 18. He is a father of two children as well. He always wanted to give a good upbringing to his children and he is doing good till date on their nurture.

Alex Song is a married man, he tied knots with his longtime girlfriend Olivia Song in 2005. The pair have two children, Kaylen Song, and Nolan Song.

He is Ambassador for Grassroot Soccer, an international non-profit organization working through football to stop the spread of HIV.

How Much is Alex Song's Net Worth?

As of 2019, Alex Song has an estimated net worth of $5 million and earns an annual salary of $4.2 million from his club. Further, he is ranked number 7 in the Top Ten Richest African Footballer list in 2017.

It is reported, his recent market value price is $3 million whereas his highest ever price was $30 million in 2012.

Alex Song was born Alexandr Dimitri Song Billong on September 9, 1987, in Douala, Cameroon. He is  Cameroonian and belongs to the black ethnicity. Song lost his father when he was just 3 years old and since then he was raised by his uncle, Rigobert Song.

His uncle has a great influence on his football career. At the age of 16, he joined the French association football, Bastia.

Alex Song got married to Olivia Song in 2005. There is no any information whether she is his school sweetheart or she was his girlfriend or his family had arranged the girl from him as the marital arrangement is done from family side in some of the culture. They are living happily and peacefully and are blessed with 2 children.

Nolan is the eldest son of Alex Song. He loves his son very much and cares about his good upbringing in life.

Kelian is Alex's second song. He loves his son very much and cares about his good upbringing in life.