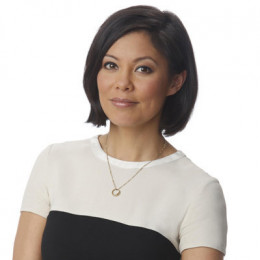 Alex Wagner is an MSNBC anchor who hosts her own show 'Now With Alex Wagner'. She was born to father Carl Wagner and mother Tin Swe Thant, a former Myanmarese. Her father was formerly a political consultant for the Democratic Party. After completing her schooling from Woodrow Wilson High School, she studied art history and literature and graduated from Brown University in the year 1999.

After a long time hush-hush affair, Wagner was engaged to the White House chef in September 2013. this couple got married at the Blue Hill restaurant situated in Pocantico Hills on August 30, 2014. American president Barack Obama and his entire family attended the wedding. This couple does not have children yet and currently live in Brooklyn, New York. There are no rumors whatsoever about their extra-marital affairs or issues leading to divorce.

An American journalist and liberal politics Alex Wagner was born on December 4, 1977, to Tin Swe Thant and Carl Wagner. Her ethnicity is Burmese and she holds American nationality.

She was raised in Roman Catholic who belongs to the Burmese ethnicity and holds American nationality.

She attended the Woodrow Wilson High School and in 1999 she completed her graduation from Brown University in art history and literature.

In 2003, she started her journalism career as she worked as the cultural correspondent for the Center for American Progress.

Wagner then became the White House correspondent for Politics Daily and moved to The Huffington Post.

On November 14, 2011, Alex hosted the MSBNC show Now with Alex Wagner which was a quiet hit. In November 2016, Wagner replaced Vinita Nair on CBS This Morning Saturday.

Alex is a married woman, On August 30, 2014, she exchanged the vow with the former White House nutrition policy advisor and assistant chef Sam Kass.

The duo wedding took place at Blue Hill at Stone Barn. Their wedding was actually a grand of that time because former US president Barack Obama was a part of their special day.

It's been three years of their marriage and the duo is very happy with one another company. Both of them are the highest peak of their career and that might be the reason they still haven't planned about having children.

She has been very successful in her career and it has given her great earnings and a wonderful net worth. As she succeeds to earned around 3 million dollars of net worth.

Moreover, she gets paid a healthy salary of 400,000 U.S dollars which boosts her net worth every year.

Alex married a long time but not disclosed boyfriend Sam Kass, the chef of the White House, on August 2014. They were engaged in September, 2013. They do not have any children yet.