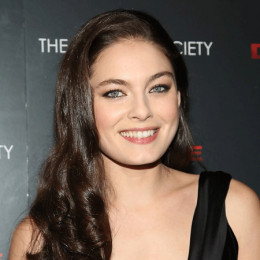 Alexa Davalos Dunas is an actress and professional model, best known for playing on the fourth season of the TV series Angel, as Gwen Raiden. She has played several films such as Clash of the Titans, The Chronicles of Riddick, The Mist, Defiance and Feast of Love. Her mother is Elyssa Davalos, an actress and Jeff Dunas, a photographer. She is fluent in English and French.

Alexa Davalos hasn't been married to anyone yet. It is also reported that she is not dating anyone as of now.

Previously, Davalos was reported to be dating Josh Lucas. The former boyfriend-girlfriend couple dated from 2006 to 2008.

The star moreover is close to Amanda Righetti, an actress. She became Righetti's bridesmaid at her wedding.

On 19th May 2019, she posted a picture with a mysterious person.

Alexa Davalos holds a net worth of about $4 million as of 2019. She makes her money from her acting career. A star generally makes an annual salary of $150k to $1 million.

Alexa Davalos Dunas was born on 28 May 1982 in Paris, France. She is the daughter of actress Elyssa Davalos and photographer Jeff Dunas. The star is French and belongs to Mixed ethnicity (Spanish and Finnish descent).

Thank you @sallybranka and @norisolferrari for my 1st and 2nd skin.

The actress is known for her role as Gwen Raiden on the TV series Angel. Recently, she appeared in the Netflix series Marvel's The Punisher in 2019.