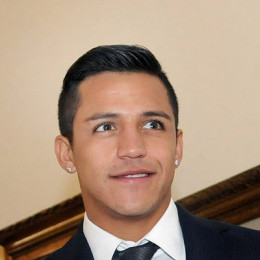 Alexis Sanchez is a Chilean footballer playing for the Chile National Football Team and English club side Arsenal as a forward wearing the jersey number 17. He began his professiona career at the age of 17. He is also known as Niño Maravilla. Alexis was born in Tocopilla, Chile was raised by Jose Delaigue, who had adopted Alexis. He does not have any parents. His godfather Jose Delaigue died in 2011 due to heart attack.

Alexis Sanchez is very famous among girls as he is in football. He dated several of the girls who are pretty, glamorous and are like a diva. Till now, he has dated with five different girls, all with the different but spectacular enigma.

The news and rumor of his split and new GF can be seen in the celebrity news. He is not married yet but currently is in a relationship with a model.

He is playing for English Premier League club Manchester United and the Chile national team.

He moved to Barcelona after three seasons in Italy in a transfer worth €30 million (£25 million). He became one of the most expensive Chilean players of all time.