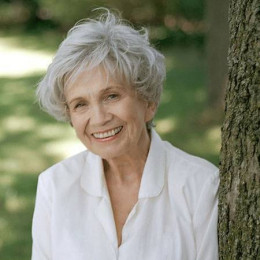 Alice Ann Munro is the first Canadian Nobel Prize winning author. In 2013, she won Nobel Prize in Literature for her lifetime body of work. She received the Governor General's Award for English language fiction (in 1968, 1978, 1986). She studied journalism and English at University of Western Ontario, but left university just in 2 years to marry her boyfriend James Munro. She is the daughter of Anne Clarke Laidlaw, a school teacher and Robert Eric Laidlaw, a fox and mink farmer.

Till the day, she has been married twice. At first, she was married to her boyfriend for whom she dropped her college. The couple actually had four daughters but one of them died after 15 hours of birth. She got separated from her first husband due to some conflicts in their relationship. She again got married to another man with whom she was satisfied and happy but he died at the age of 88.

The couple knew each other since they enrolled at the University of Western Ontario. The couple has with three lovely daughters together.

He was a cartographer and geographer. The couple owned a home in Comox, British Columbia. No children were born from their marriage.

She is a author who published a childhood memoir, Lives of Mothers and Daughters: Growing Up With Alice Munro in 2002.

She was the second child born to Alice who unfortunately died 15 hours after birth.

She is the third child born safe and sound. Current status about her is unknown.

She is the youngest member in the house who was born healthy.