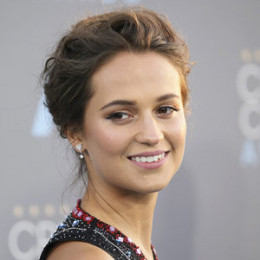 A Swedish actress and former dancer, Alicia Vikander dates with an actor Michael Fassbender since November 2014. She is a daughter of a stage actress, Maria (Fahl) Vikander and a psychiatrist, Svante Vikander. Vikander started her career at the age of seven. Alicia is best known in Scandinavia for her role in the popular Swedish TV drama named Andra Avenyn (2008–2010). She has admitted to law school.

There is a rumor that Alicia Vikander has an affair with Alexander Skarsgård in 2014. She has nominated for the Golden Globe and BAFTA Award in a category of Best Supporting Actress. Alicia has also received the Academy Award and the Screen Actors Guild Award for Best Supporting Actress. Vikander is an owner of a production company named Vikarious with her agent Charles Collier. She has also appeared in the Australian crime thriller called Son of a Gun.