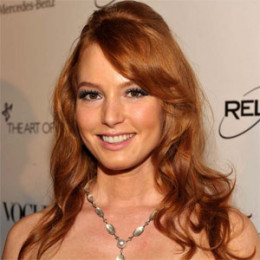 https://marriedwiki.com/wiki/peter-krauseShe was born as Alicia Roanne Witt, to mother Diane who was a teacher and her father Robert Witt was a photographer/ teacher. Born as the eldest of two, her younger brother Ian is also an actor. She was a young prodigy and apart from her educational talent, she was also very sharp in music and acting. After first noticed by director David Lynch, she did her first movie role at the age of eight, in the film named Dune in 1984.

Not much information about her personal life has been displayed online. Although as an actress, she can't hide from the camera and public, still has managed to keep her personal life quite private. She has been only in a couple of relationships that are discussed in this article. Unlike many actresses, she doesn't have a long list of her boyfriends.

The 43 years old talented actress, Alicia Witt is not married yet and is currently single. She dated several guys in the past, she had an affair with television actor, Peter Krause, from 1988 to 1999.

After that, she began dating Nathan Foulger, director, and producer in 2003 but broke up in 2006. Also, she dated American singer-songwriter and record producer, Ben Folds from 2012-2014.

As of 2019, she has an estimated net worth of $4 million, as per celebrity net worth. Moreover, the average annual salary of an actor in America is $45,000 to $57,000 per year which may vary according to their performance and experience.

Alicia Witt was born on 21st August 1975, in Massachusetts, United States, to Diane Witt, and Robert Witt. Her mother is a junior high school reading teacher whereas her father is a science teacher and photographer.

Her birth sign is Leo.  Witt grew up along with her sibling brother Ian.