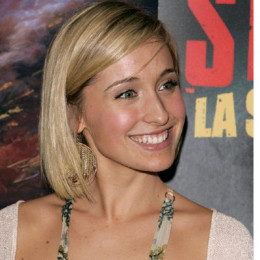 Allison Mack is an American actress, director and a producer who is recognized for her performance in the drama series SmallVille as Chloe Sullivan. She was born to American parents, Mindy and opera singer Jonathan Mack in Germany . She has an older and a younger sibling. She started her career in acting from the commercials for "German Chocolate" at the age of 4. She went to The Young Actors Space to study in acting at the age of 7.

She is in a relationship and is engaged as well. She has dated three guys till date. She has been engaged twice, initially to her first boyfriend and recently with her third boyfriend.

Her first affair was for more than 5 years and they were engaged too but later she felt like it was too early for her to get married and then they broke and she happened to mingle with her second boyfriend. She dated him for nearly two years and got in a relationship with this third guy whom she loves much and is engaged as well.

She amassed a net worth of about $2 million.

Allison Christin Mack was born on 29 July 1982 in Preetz, West Germany. She is best known for her role as Amanda on the FX series Wilfred and as Chloe Sullivan on the WB/CW series Smallville.

FBI arrested her on 20th April 2018 on charges of sex trafficking and conspiracy. In addition, she was charged with exploiting a child and possessing child pornography in March 2019.

Prosecutors revealed that she is now in negotiations with the government for her role in upstate sex-slave cult Nxvim.