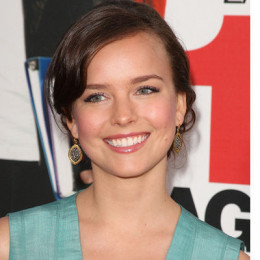 Allison Miller is an actress who has been popular for her role as Michelle Benjamin on the NBC series named Kings. She became successful with this role and had fulfilled all the expectations from her side. She is the only daughter in the Miller family, her father is John Winn Miller who was the publisher of the newspaper named The Olympian form Washington. Meanwhile her mother name is Margo Miller and is active housewife. She spent her entire childhood in Lexington, Kentucky and later shifted towards Florida.

Allison is very much shy and private. There was not any rumor and gossip about her dating and affairs in the media until she married American comedian and actor Adam Nee in 2012.

The couple maintained the distance between the media and had a wonderful time together. Until now they don't have any children and also don't expect this soon in their career.

Miller and her husband Lee are separating after seven years of marriage in January 2019. As per the court document, the filmmaker filed for divorce in Los Angeles to end their relationship.

The actual cause of their split and the date of separation is currently not known.

She holds an estimated net worth of about $5 million as of 2019.

Allison Miller was born on 2 September 1985 in Rome, Italy. She gained wide recognition playing the role of Michelle Benjamin on the NBC series Kings.

She married Adam Nee in the year 2012 after their affairs for short time. Her husband is an American comedian and actor, which has helped them to settle easily. They don't have any children yet but who knows about the days ahead. Allison was never reported or interviewed about any other affairs and relationship. She reveled that she never had any other boyfriend except her current husband and is very much happy together.