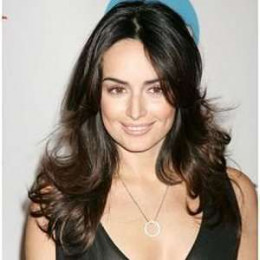 Ana de la Reguera is a Mexican actress. She began her career from HBO television series "Eastbound" and "Down". Ana is the daughter of Nena de la Reguera who is a journalist and TV personality. Her acting career began from Azul, for which she won the Heraldo award for the title best female acting. Ana has worked as the host of the MTV Video Music Awards.

Ana de la Reguera is rumored to secretly married her boyfriend but no official confirmation has come about it, so, her relationship status is still a mystery to her fans. Previously, she dated Diego Bonetta and broke up later.

Additionally, Ana was linked up with many high profile personalities from celebrities to journalists. She had a relationship with Chef Mario Carbone and planning to get married but due to some personal issues, the couple split apart. The actress then dated actor Erick Elias and the journalist, Jorge Ramos.

Ana de la Reguera has an estimated net worth of $2 million which she accumulated from her acting career. Additionally, she earns $100 thousand+ from her TV screen appearances and somewhere between $300k-$500k from movies.