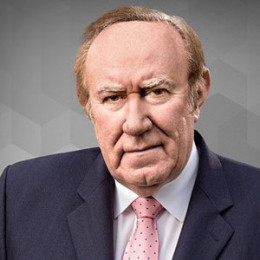 Andrew Ferguson Neil, better known as Andrew Neil, is a Scottish journalist and broadcaster. He is a former editor-in-chief and chairman of the Press Holding group which owns The Daily Telegraph and The Spector. Currently, he presents the live politics program Sunday Politics and This Week on BBC One channel and Daily Politics on BBC Two channel.

Andrew Neil was born on 21st May 1949 in the city of Paisley, Renfrewshire, Scotland. His father was an electrician and member of the Territorial Army, whereas, his mother used to work at local cotton mills. He is Scottish and belongs to white ethnicity.

He attended Lancraigs Primary School and at the age of 11, he passed out his 11-plus examinations. Then, after giving entrance, he studied at Paisley Grammar School.

He passed his degree with an MA with honor in political economy and political science from the University of Glasgow, where he edited the student newspaper, the Glasgow University Guardian.

He was also a member of Dialectic Society and the Conservative Club. He participated in Glasgow University Union inter-varsity debates and was a chairman of the Federal of Conservative Student during 1971.

After completing a degree, he worked for a local newspaper, the Paisley Daily Express, as a sports correspondent and moved to the Conservative Party as a researcher assistant.

After working in small companies, Andrew worked as an editor of The Sunday Times from the year 1983 to 1994. There was a controversy regarding his hiring in The Sunday Times. It was said Rupert Murdoch hired him over more experienced colleagues such as Hugo Young and Brian MacArthur.

As an editor, he revealed the detail of Israel’s nuclear weapons program in 1986, by using photographs and testimony from former Israeli nuclear technician Mordechai Vanunu. He also met former Miss India, Pamella Bordes in 1988.

The same year, he became the chairman of Sky TV and Murdoch’s News Corporation. The Sky was not an instant success because of its uncertainty caused by the competition provided by British Satellite Broadcasting (BSB) and in 1990, BSB’s failure led to the merger with Sky forming a new company, British Sky Broadcasting (BSkyB). By July 2010, it was one of the most profitable and successful television companies in Europe.

Andrew began his career in TV after joining BBC and presented the show like This Week, Daily Politics, and Straight Talk with Andrew Neil. But his Despatch Box on BBC Two and Is This Your Life?, was popular show and was nominated for BAFTA award for Best Talk Show. Here, he interviewed famous personality including Albert Reynolds, Morris Cerullo, Jimmy Savile and Max Clifford.

Moreover, he has provided commentary on foreign election and with Katty Kay led the BBC’s overnight live coverage of the 2016 United States presidential election.

Andrew married his gorgeous Swedish girlfriend, Susan Nilsson in 2015. After dating several years, the couple tied the knot secretly in the South of France in a private ceremony in front of their family and friends including Deal Or No Deal presenter Noel Edmonds and his wife, Elizabeth Davies. They are enjoying a happy married life and has not shared any children yet.

He is great fan of cricket and is a member of Marylebone Cricket Club.

Andrew Neil is one of the successful political programmer who has spent his life time working in the related field. He earned around £250,000-£300,000 as his salary. Looking at his monthly salary, he probably has an estimated net worth of more than seven figures.

Andrew Neil married Susan Nilsson secretly in a private ceremony on 8th October 2015. Susan is 20 years younger than Andrew. They announced they were married via Twitter by posting their wedding picture.