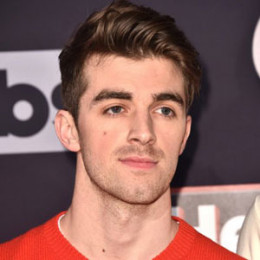 Andrew Taggert is an American Musician wide recognized as one-half of the DJ duo The Chainsmokers. The single titled #Selfie made a big hit in the music industry. Taggert is currently in a romantic relationship with actress Haley Rowe. The duo has been dating since 2016.

Andrew Taggart was born on 31 December 1989 to a teacher and prosthetics seller in Freeport Maine.

Taggart attended Syracuse University a prestigious Bandier. He developed the interest in music from his early days. He also interned for agents and managers of the music industry

With the keen interest in music, Andrew joined a band The Chainsmokers, duo consisting of Andrew and Alex Pall which was formed in 2012. The band was under the management of Adam Alpert in NYC. The band also got an opportunity to work with Indian actress and singer Priyanka Chopra on the single Erase in 2012. The following year they released The Rookie.

The band is also recognized for their work on Louis the Child, a Chicago-based music duo consisting of Robby Hauldren and Freddy Kennett. In 2016, they released their second EP Collage which reached No.6 on the Billboard. The Chainsmokers won The 2017 Woodie of the Year Award by MTV Woodies.

Closer was the band's song which got on Billboard Hot 100 in a short span. It also acquired the top spot for 12 consecutive weeks. It has won a Grammy Award, American Music Award, and iHeartRadio Music Awards.

In 2016 band released their next hit Don't Let Me Down. The song was performed live for the first time in Coachella VAlley Music and Arts Festival. It also got the nomination for Best Pop Duo/Group Performance at the 2017 Grammy Awards.

In 2017, Andrew won the awards such as Best New Artist, Best New Pop Artist and Dance Artist of the Year along with The Chainsmokers.

Andrew Taggart's current girlfriend is Haley Rowe. The duo has been dating since 2016. They often hang out together and post their photos on Instagram.

Andrew was also rumored to be in relation with You Tube star Ashley Frangipane. They also gave the steamy onstage performance in 2016 MTV Video Music Awards.

With his incredible hits like Closer, #Selfie and Roses, Taggart makes a decent amount. His current estimated net worth is $4 million.