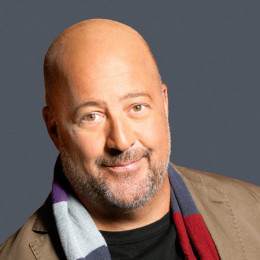 An American television personality, chef, food writer and teacher who is widely known as a celebrity chef and co-host of Bizarre Foods with Andrew Zimmern, Bizarre Foods America, and Andrew Zimmern's Bizarre World. He was born to a Jewish family. He started his culinary training when he was just 14 years old. He completed his graduation from Vassar College. When he was young he got severe drug and alcohol addiction and even became homeless for a year but later he got rehabilitated in Hazelden Treatment Center. In starting of his career he worked as editor of Mpls. St. Paul Magazine and a senior editor at Delta Sky Magazine. He also worked as food features reporter for Fox 9 News Minneapolis. He was awarded James Beard Award for Media Personality.

Damon Wayans is happily married to his longtime sweetheart. In an interview, he stated that his wife has always been supportive throughout his career. It seems like they got a very strong bonding of love. Together the couple has been blessed with one son. He is a family man and he loves to spend time with his son going to museums and training in Shotokan Karate.

Andrew Scott Zimmern was born as Andrew Zimmern on July 5, 1961, in New York City. She was raised in a Jewish family. He was interested in cooking since his school days as he began his formal culinary training at the age of 14.

He joined the Dalton School and graduated from Vassar College. He lectured at The New School for Social Research on restaurant management and design.

Andrew Zimmern started his professional career soon after the completion of his education. He is a contributing editor and award-winning monthly columnist at Mpls. St. Paul Magazine and a senior editor at Delta Sky Magazine. He also worked as a freelance journalist and his work has appeared in numerous national and international publications. 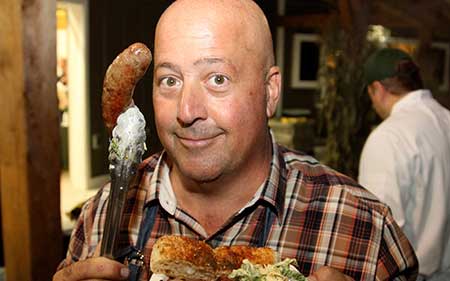 Later, Zimmern worked as  SuperTarget's meal adventure guide and international spokesman for Travel Leaders and Elite Destination Homes. He had an extensive radio career. He hosts the shows like Chowhounds, The Andrew Zimmern Show, and Food Court With Andrew Zimmern which were hugely popular in the Twin Cities.

Andrew Zimmern's book The Bizarre Truth: How I Walked out the Door Mouth First ... and Came Back Shaking My Head was published by Broadway Books in 2009. He gains international fame from Travel Channel show Bizarre Foods with Andrew Zimmern. The show was for 15 seasons and over 100 episodes.

In 2010, Zimmern won the James Beard Award for Outstanding TV Food Personality and in 2013, he received James Beard Award and a third in 2017. He also won  Effie Award in 2010 for his online series, Toyota's Appetite for Life. He is an executive in residence at Babson College.

Andrew Zimmern is a popular American chef, food writer, and teacher. He has an estimated net worth of $8 million which makes him one of the highest paid chef. Usually, he made more than $1 million from his appearances on TV shows.

Andrew Zimmern is a married man, he tied the knot to his lady love, Rishia (née Haas). The duo married at an intimate ceremony in the presence of their closed ones and family members. They shared a son, Noah Zimmern. 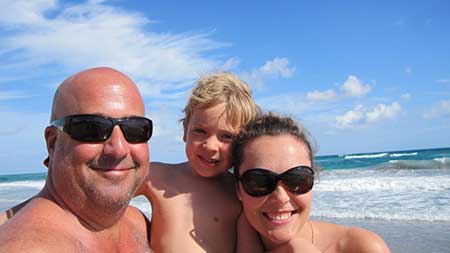 Zimmern enjoys going to museums and trains in Shotokan Karate in his free time. He shared a good bonding with the actor, Masaharu Morimoto. He is active in social sites, as he has more than  1.25+followers on Twitter and529k+followers on Instagram.

She is very gorgeous. She has given birth to a son. Currently she is residing in Edina, Minnesota along with her husband and son.

He is the only child of the family. He has made brief appearances in TV show Bizarre Foods.