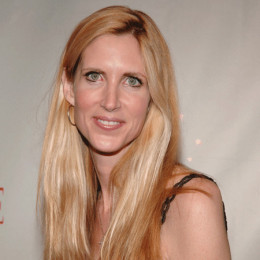 Ann Hart Coulter is an American conservative social as well as a political commentator, lawyer, syndicated columnist and also a writer. Frequently she appears on radio, television and also as a speaker at public and private events. Her father John Vincent Coulter was an FBI agent and her mother Nell Husbands Coulter was a native of Paducah. In 1984 she had completed her graduation from Cornell with B.A in history.

She has never been married nor has any children. But she has been engaged several times. She had dated many guys. She had dated a founder as well as a publisher and a conservative writer. After that she began dating a former president of the New York City Council. Besides her affairs she likes to study books. She also likes music.