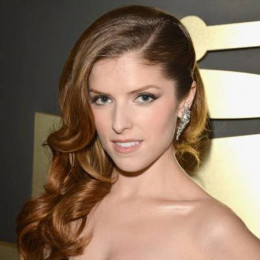 An American actress and singer who rise to fame after her role as Jessica Stanley in The Twilight Saga and Beca Mitchell in Pitch Perfect (2012). She is daughter to Janice Kendrick, who is an accountant and and William K. Kendrick, who is a history teacher. She completed her high school from Deering High School in Portland. She had keen interest in acting from her young age and as a result she started her career in the Broadway musical High Society for which she was awarded with Tony Award nomination for her work. She debuted in film industry in 2003 in a movie named Camp. She has already won Oscar in Best Supporting Actress for her role in the film Up in the Air.

Anna Kendrick was born on 9 August 1985 in Portland, Maine to William Kendrick and Janice (née Cooke).

She has an elder brother, actor Michael Cooke Kendrick. She belongs to Scottish, Irish, and English descent. She studied at Deering High School.

Kendrick started her career as a child actress in theatre. She received the very first starring role in 1998 Broadway musical High Society.

i don’t play tag bitch i been it

She rose to fame playing the supporting role as Jessica Stanley in The Twilight Saga (2008-2012). Further, she became fans favorite as Beca Mitchell in the Pitch Perfect movie series (2012-2017).

Kendrick has an estimated net worth of about $14 million as of January 2019.

She was in a relationship with director Edgar Wright in 2009. They met on the set of Scott Pilgrim vs. the World. Their affair ended in March 2013.

The couple was last spotted crossing the street during a day out in Miami on 11 July 2018.