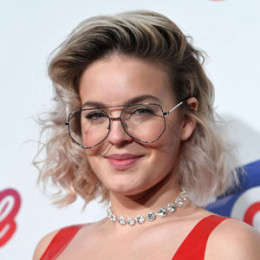 Anne-Marie Rose Nicholson is an English songwriter and singer, widely known for featuring in the song "Rockabye" with 'Clean Bandit's, featuring Sean Paul, which peaked at number one. Anna Marie is in a relationship. However, she has not revealed anything about her boyfriend yet.

Anne Marie was born on 7th April 1991 in Essex, England. Her dad was from Ireland, whereas her mother was from Essex. During her early age, Anne appeared in two West End production as a child.

At her age of twelve, she made her appearance in 'Whistle Down the Wind' alongside a young Jesse J. Moreover, Marie has been practicing Shotokan since she was nine.

Her career as a singer and songwriter began in the year 2013 when she recorded a solo demo for Rocket Records in 2013 called "Summer Girl." Later she joined a band named 'Rudimental,' replacing the vocalist of the band.

Anna Marie featured on four songs on their album 'We the Generation.' Afterward, in November 2015, she releases her single 'Do It Right,' peaked at number ninety on the UK Singles Chart.

Her another popular song 'Alarm' was released in the year 2016, which peaked number seventy-six in June, and after months it was peaked at number 16.

Later in the year 2016 October, 'Clean Bandit' released their track "Rockabye," which featured Sean Paul and Anna Marie. The song was peaked at number one for nine weeks and also earned the coveted Christmas number one.

The following year, Anna launched another track 'Ciao Adios,' peaked at number 9 in the UK.

Anna Marie is said to be in a relation, as she said in an interview "I can't say because he is quite well known."

She is a good friend with British singer Ed Sheeran, and Jessie J. Her popular single 'Do It Right' was inspired by her previous boyfriend, with whom she dated for two years.

Anne Marie earns an enormous amount of money from her successful career as a songwriter and singer. Her hit single 'Do It Right' received a gold certification in Australia, with the sales of 35,000 copies.

Another hit song in which Anne featured 'Rockabye' earned a platinum certification with over 1,000,000 copies. Considering this, we can assume that Anne Marie earns a huge amount and has a good net worth.