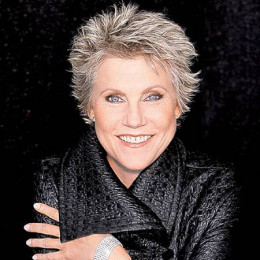 A Canadian singer who has already won four Grammy Awards and twenty-four Juno Awards. She is talented in all pop, country, and adult contemporary music and she has earned international recognition after her single "Snowbird" got released which has been sold more than fifty-four million albums internationally. She was born to James Carson Murray, a doctor and Marion Margaret Murray. She had keen interest in music from her small age and as result she took piano lesson for six years. She is also the first Canadian female singer to reach no.1 on the united states charts.

Exploring her personal life she was married. After years of their marriage, the relationship didn't go well and they got divorced. Together they were parents of a son and a daughter. Till now there has been no rumor of her having any affair with anyone after her divorce. In 2013 her ex-husband died. Her daughter is also a talented singer like her. And they have sung many duets together.

Anne Murray was born as Morna Anne Murray on June 20, 1945, to James Carson Murray and Marion Margaret (née Burke) Murray. She was raised in the coal-mining town of Springhill, Nova Scotia along with her five brothers.

Murray holds Canadian nationality and belongs o the white ethnicity. Her father was the town doctor and mother was a  registered nurse who focused her life on raising her family and community charity work.

After completing her high school, Murray joined Mount Saint Vincent University in Halifax for one year. Later she attends the University of New Brunswick where she studied Physical education.

Anne received her graduate degree in 1966 and after that, she taught physical education at a high school in Summerside for nearly one year.

Anne is interested in music since her childhood days as she studied piano for six years. At the age of 15, she began taking voice classes. Her first performance was at her high school graduation in 1962 where she sang the "Ave Maria".

Murray is possibly single as of now but previously she was married to Bill Langstroth, music producer and longtime host of Singalong Jubilee. The duo exchanged a vow in 1975, they shared two children; William (born 1976) and Dawn (born 1979)

However, the couple couldn't handle their relationship and had divorced in 1998 though they are separated in 1997. Her ex-husband died in 2013.

Anne younger son is a singer-songwriter and artist who has recorded with her number of times, including the duet "Let There Be Love" in 1999. In 2009, Murray released her autobiography, All of Me.

Anne is one of the popular Hollywood celebrities and her earning is also very impressive as she succeeds to maintain net worth of $45 million.

They were in marriage relationship for more than two decades. Due to some personal reasons they divorced. Recently in 2013 he died.

He is the eldest child of the family. His picture along with family can be found in internet.

She is also a singer and songwriter who has already sang in collaboration with her number of times.