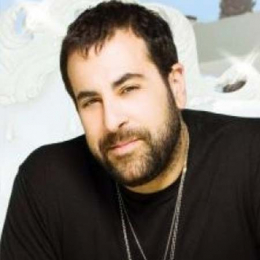 American designer, Antonio Ballatore caught the limelight after hosting the popular show titled "The Antonio Project HGTV" series. He is also famous as the winner of the fourth season of HGTV 's reality competition series named 'Designer Star' in 2009. More to that, he was named the Lady Gaga of interior design by LA Weekly.

Antonio Ballatore is currently dating a mysterious girl. The duo seems to share a good bond as they both are spotted many times together. Further, the pair is in a relationship from a couple of years, however, there is no proper evidence about how the couple first met and started dating.

The couple is deeply in love and here you can see a post from Antonio wishing her better half Valentine's Day of 2019,

The designer looks happy in his relationship as there is no sign of breakup between them. Following that, everybody including the fans of Ballatore is waiting for him to disclose the name of the girl. Besides, Antonio is an animal lover and owns three pet dogs named Chewie/Antonio, Griffy, and Edie.

What is the Net Worth of Antonio Ballatore? Know about his Earnings, Salary

Antonio Ballatore's net worth lies somewhere between $100,000-$900,000, all thanks to his career as a television personality and designer. In addition, the average salary of an architectural designer is $51,570 per year whereas the average pay for an interior designer is $49,810 a year. Besides, some famous designers like Nate Berkus hold a net worth of $9-$18 million as of 2019.

Antonio started his career as an architectural designer for celebrity photographers in Los Angeles. After that, he worked as a host for the popular show named The Antonio Project HGTV series from 2010-2014.

Prior to that, he won the 4th season of HGTV's Design Star reality competition in 2009. What's more, he also designed sets for famous photographers like Annie Leivobitz and David LaChapelle in his early career. Besides his amazing career, he's also famous among his fans for amazing tattoos on his body.

As of now, the designer works for the Animal Planet Series named Animal Cribs since 2017. He combined his love for the animals and interior design working in the series and even operated his own animal and human apparel line 'Born With a Tail'.