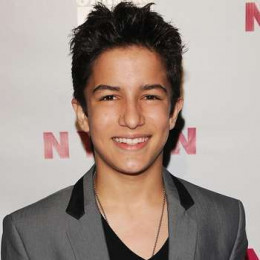 Aramis Knight is an American actor. He is of Indian, German and Pakistani descent. There is no any information about his father and mother. There is also no any information about his early life. He had started his acting career in 2005 by acting in commercials and playing some minor screen roles. After that he had worked in many films named Rendition, Crossing River, and Valentine�s Day etc. He had also worked in many television series named Boston Legal, Invasion, and Life on Mars etc.

He is only sixteen years old. There is no any information about his having any affairs or relationships yet. He has a very charming personality and very good looking also. As he has mentioned that he is a very serious actor and only likes to work on a serious project. It seems that in so early age he had already determined and specified about his work. There is many more to achieve by him in his career in future and by his dedication he is going to achieve all the success in his career. Aramis also worked in the Ms. Marvel series alongside Zenobia Shroff.