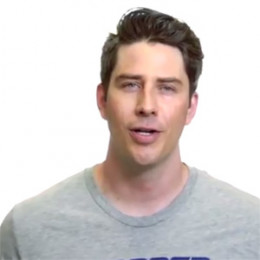 Arie Luyendyk Jr. is the son of an accomplished racer, Arie Luyendyk. He followed his father's footstep and became an auto racing driver. He is best known for completing the Indy Lights Series and finished 2nd, 3rd and 4th in the Championship over some years. Also, he has competed in the various sports-car series like the 12 Hours of Sebring and the 24 hours of Dayton. He even participated on ABC’s The Bachelorette season 8 where he became the first runner-up and participated on Wipeout: Summer Episode 7: Bachelors vs. Bachelorettes.

Born on 18th September 1981, Arie Luyendyk Jr. is the son of world famous 2X Indianapolis 500 winner Arie Luyendyk. Though he was born in ‘s-Hertogenbosch, Noord-Brabant, Netherlands, he grew up in the United States.

He began racing karts at the age of 10, and then he joined Sports Car Club of America, Formula Ford. He followed his father’s footstep and made his career in his near future.

Arie Luyendyk Jr. began his career as a car racer in 1992 and participated in few of American junior formulae winning in the Skip Barber Formula Dodge series and top-five finishes the U.S. Formula Ford 2000 Championship.

He also finished third in the Formula Continental class at the SCCA National Championship Runoffs and won the SCCA Southern Pacific divisional title on the strength of 4 wins in 2001. Competing full-time in the first three seasons of the Indy Racing League’s Indy Pro Series (now known as Firestone Indy Light), he had one victory, four pole positions, and 24 top-5 finishes and was voted IPS for Most Popular Driver four years in a row since 2003-2006. He finished second in the Firestone Indy Lights Championship in 2002, third in 2004 and fourth in 2008.

He drove for the A1 Team Netherlands in the A1 Grand Prix World Cup of Motorsports as the team’s rookie driver in the 2007-2008 A1 Grand Prix season. His best was fifth-place training time at Round 5 in Taupo, New Zealand and made a comeback to the Firestone Indy Lights Series to race for AGR-AFS Racing teaming up with Raphael Matos.

In 2010, he drove in the Freedom 100 for Andersen Racing and three other oval races for Alliance Motorsports as a part-time to Indy Lights where he finished seventh at Chicagoland. He also participated in the Stadium Super Truck Series, Traxxas TORC Series and finished fourth at Crandon International Off-Road Raceway driving the Pro Light class.

Apart from his career in driving, he participated in the reality show, The Bachelorette season 8 and placed second, where he tried to win the heart of bachelorette, Emily Maynard. He appeared in the seventeenth season of The Bachelor where he becomes a friend of Sean Lowe. Also, he participated in Wipeout: Summer Episode 7: Bachelor vs. Bachelorettes and in season nine of Hell’s Kitchen.

Moreover, he became the driver analyst for versus broadcasts of Indy Lights races and returned to the booth commentating the lights race for the NBC Sports Network. Just recently in September 2017, he announced that he is the next new Bachelor, in an interview with Good Morning America.

Arie Luyendyk Jr. is dating his longtime girlfriend, Jennifer Perkins. Previously, he was in a relationship with Sydney Stempfley, in 2016. The boyfriend-girlfriend dated nearly for a year: met over Instagram DMs in 2016 and started dating.

Date night! Always trying to find fun ways to keep the spark alive My date night set up with @duraflame turned out great! I use Duraflame because it’s super convenient, only take 5min to be fully lit and it burns for 4 hours. Try it out this Valentines Day! #Duraflame #DuraflamePartner #BetterByTheFire

After living nearly a year in a relationship, the duo break-up this July 2017 due to some personal reason. Due to their secretive nature, they have never revealed the fact behind their split. Currently, he is single.

Arie Luyendyk Jr. is one of the richest sportsmen who has an estimated net worth of $20 million. His source of income includes auto racing and reality shows.

He earned most of his fortune from the racing career. According to the source, in 2006, Luyendyk Jr participated in the Indy 500 finishing in 28th position. Though he was not a winner, he took home a good amount of money; $196,055. He earned quite a lot of income during his Indy Light series: In over the course of eight seasons, he made $415,550.

He is also a real estate agent for RE/MAX Excalibur and earns pretty goods commission from selling houses. Similarly, he has also appeared in the TV Shows like; The Bachelor and Wipeout: Summer Episode 7: "Bachelors vs. Bachelorettes which helped to earn a decent amount each episode.

In 2018, he is announced to be the 22nd bachelor in the show The Bachelor.