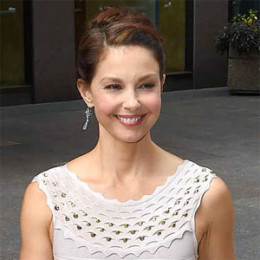 Ashley Judd, an American actress and political activist, is best known for her contribution to entertainment field for more than two decades. Her breakthrough performance on 2012, TV series named Missing helped her to gain Emmy nomination for Outstanding Lead Actress in a Miniseries or a Movie. Judd is possibly single at the moment, but previously she was married to Dario Franchitti, Scottish racing driver.

Judd was born on April 19, 1968, in Los Angeles, California, U.S. to  Naomi Judd and Michael Charles Ciminella. Her birth name was  Ashley Tyler Ciminella. Her mother, Naomi was a country music singer and also known as motivational speaker whereas her father Michael was a marketing analyst for the horseracing industry.

She was raised along with her sister, Wynonna in  Kentucky by her mother after her parents divorced. Judd holds an American nationality and belongs to the white ethnicity.

Judd attends the school at Marin Country, California and nearly changed 13 schools before going to college. She majored in French and minored in several topics like; anthropology, art, history, theater and women's studies.

She joined the University of Kentucky and attended several Kentucky football games. Later, she graduated from the UK Honors Program and succeeded to get nominated in Phi Beta Kappa, but due to some issue, she did not graduate with her class.

In 2007, Ashley earned her bachelor's degree in French from the University of Kentucky. She earned  Doctor of Humane Letters from Union College and subsequently received a  Mid-Career Master of Public Administration degree from  Harvard University.

Ashley Judd began her acting career since 1991, but she got her significant role in 1993 in the film, Ruby in Paradise which opened roads to Hollywood. She worked on many movies and TV series like; Heat, Norma Jean & Marilyn, Kiss the Girls, Simon Birch, Where the Heart Is, Missing and much more.

Judd then served as the magazine advertising "face" for American Beauty, an Estée Lauder cosmetic brand. In 2015, she became the first women to narrate the Kentucky Derby.

In 2000, she was awarded Blockbuster Entertainment Award for  Favourite Actress - Suspense for the movie, Double Jeopardy.

Further, she is known for her contribution in political activities. She was a supporter of Barack Obama's presidential campaign in 2008. In 2010, she worked for Animal Legal Defense Fund's to protect Kentucky's homeless animals.

Ashley Judd, 49 is possibly single at the moment, but previously she was in a marital relationship with Scottish racing driver, Dario Franchitti. The duo's nuptials took place in December 2001 at  Skibo Castle in the presence of their close friends and families.

The former couple didn't have any children, and when she asked about it by Sunday Mail, she replied,

However, after living as husband and wife for 12 long years, the pair divorced in 2013. Prior to her marriage, she was linked up with several celebs. She was treated for depression, insomnia, and codependency in 2006.

Ashley Judd is known as one of the successful media personality. From her 26 years long career, she not only achieved name and fame but equally, succeeded to earn an outstanding net worth. Her net worth is estimated around $22 million.

Franchitti is a four-time IndyCar Series Champion and a three time the winner of Indianapolis 500. Also, he won the 24 Hours of Daytona in 2008. As of now, he has retired as a racing driver.