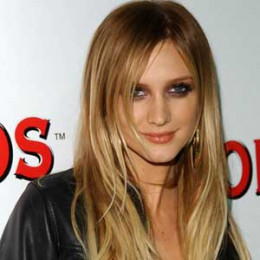 Ashlee Simpson is a famous American recording artist and actress widely recognized as a songwriter and media personality. She also became a well-known figure with her debut studio album ‘Autobiography.' Ashlee Simpson is a married woman. She was married twice, firstly with Fall Out Boy Bassist, Pete Wentz with whom she had a son named Bronx Mowgli Wentz and she also tied the knot for a second time with Evan Ross. Gorgeous star Ashlee was also rumored to be dating Vincent Piazza. Currently, she is living with her husband Evan and blessed with a beautiful daughter, Jagger Snow Ross.

Ashley Nicolle Simpson now popular as Ashlee Simpson was born on October 3, 1984, in Waco, Texas, United States.  She was raised along with her older sister, Jessica Simpson by his father John Truett Simpson, a former psychologist and Baptist youth minister and her mother Tina Ann Simpson.

When she was three, she began learning ballet and then she joined the prestigious, ‘School of American Ballet’ at the age of 11. In 1999, the family relocated to Los Angeles, California so that her sister Jessica could focus on a singing career and at same time Ashlee was cast in her first television commercials.

Simpson started her acting career in 2001, from a television series ‘Malcolm in the Middle' and appeared in a minor role. Later the next year, she was cast in a comedy movie ‘The Hot Chick,' alongside Rachel McAdams and appeared in the Warner Bros family drama series, ‘7th Heaven’, where she continued to portray her roles for six seasons.

In 2003, she released her first single, ‘Just Let Me Cry’ for Lindsay Lohan's movie, ‘Freaky Friday’ and she was signed with ‘Geffen Records’ to release her studio album.

Then, in 2004 she released her debut hit studio album, ‘Autobiography’, which became her huge commercial success featuring on the Billboard 200.

She rose to fame after appearing on her sister’s reality television show Newlyweds: Nick and Jessica. For nearly one year, Ashlee starred in her own spinoff show The Ashlee Simpson Show and earned widespread recognition.

In 2005, beautiful actress, Simpson became even more successful in her career when she launched her second album ‘I Am Me’. The album was super-duper hit and she received a platinum certification from the Recording Industry Association of America (RIAA).

In 2009, Ashlee Simpson returned to television with the series ‘Melrose Place’, where she portrayed the role of Violet Foster. Besides that, she was seen in series like CSI: NY and Americas's Next Top Model.

She earned several Awards in her career such as the Billboard Music Award for ‘Best New Female Artist of the Year’ in 2004, Teen Choice Award for ‘Choice Fresh Face', in 2004. MTV Asia Award for ‘Favorite Breakthrough Artist’ and BMI Award for her song ‘Pieces of Me’ in 2005 and 2006 respectively.

Currently, she is planning to release her fourth album after eight years of long break from music.

The popular reality TV star Ashlee Simpson married Pete Wentz in May 2008 after having an affair for two years. In November 2008 she gave birth to their son, Bronx Mowgli Wentz.

Shortly after her separation from Wentz, she then dated actor Vincent Piazza, but unfortunately, their relationship lasted for a year and a half.

In July 2013, Ashlee began dating actor Evan Ross, son of Diana Ross and the pair got engaged in January 2014. The lovely couple Ashlee and Evan tied the knot on August 30, 2014, at Diana Ross's estate in Connecticut.

Later, on July 31, 2015, Simpson gave birth to her second child, a daughter named Jagger Snow. The pair is living a happy life with no signs of getting a divorce.

The 32 year old actress, singer has launched three Broadway studio albums in her career and famous for her numerous television series. Thus, she ranked inside the top twenty highest paid celebrity of Hollywood music and television industry.

As of 2017, her current estimated net worth is around $11 million dollars.

The Gorgeous actress tied the knot with her long time love in May 2008 but their relationship ended after she filed a divorce and finally split in November 2011.

Versatile singer and actress finally find her soul mate, Evan Ross, son of Actress Diana Ross. Together they make a great couple and share a happy and sound relationship. The pair has a strong married relationship till today.

Gorgeous actress and singer Ashlee Simpson was married to Pete Wentz and together they had a son named Bronx Mowgli Wentz born on November 2008.

Simpson love life faced lots of ups and downs and finally, she found Evan Ross as her love and together the beautiful couple has a gorgeous daughter named, Jagger Snow Ross on July 31, 2015.