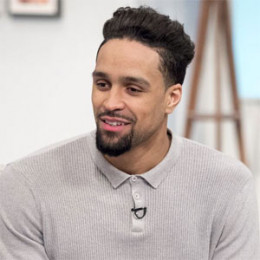 Ashley Banjo is a well-known figure in the English Television Industry. He rose to stardom winning the third series of Britain's Got Talent with his dance crew Diversity. He is also recognized for his judging style on the Sky1 talent show, Got to Dance and as a host in BBC game show, Can't Touch This. Banjo married Francesca Abbott in 2015.

Born on October 4, 1988, Ashley Banjo is the son of a Nigerian father, Funso Banjo, a former professional boxer, and an English mother, Danielle Banjo, the former Ballet dancer. His birth name is Ashley Modurotolu Banjo.

Banjo grew up along with his younger brother, Jordan, and sister Talisa Banjo in Wickford, Essex. He joined the St Johns School in Billericay and later attended SEEVIC College. He then went to Queen Mary, University and studied physics and biology, but after two years he dropped out to pursue a career in dancing.

Ashley Banjo and his brother, Jordan formed a band, Swift Moves in 2007 along with their nine friends which later changed into Diversity. He was called "Chosen" by his group members. Before participating in Britain's Got Talent, they won the Street Dance Weekend.

In 2009, Banjo along with his crew participated in the third series of ITV talent show Britain's Got Talent. Their outstanding performance impressed all the judges and public eventually winning the show. They also got a chance to perform at the Royal Variety Show.

Diversity won the Pride of Britain Awards and also succeeds to get the nomination in the Dance section of South Bank Show awards. In 2012, Banjo choreographed, produced and directed the tour for his band named "Digitized – Trapped In The Game."

The following year also he choreographed the tour for his band. He was offered to judge the five series of Sky1's dancing talent show Got to Dance. In 2015 he did a show, Perspectives: Michael Jackson's Thriller with Ashley Banjo.

In 2016, he hosted the BBC game show, Can't Touch This. In 2017, he also judged the new ITV series Dance Dance Dance. Recently, he was offered to join the judging panel for the 10th season of Dancing on Ice in 2018.

Ashley Banjo, 29, is a happily married British dancer. He lives in London with his wife, Francesca Abbott. The duo tied the knot after six years of relationship on July 4, 2015. They announced their engagement in October 2014.

The duo first met in 2007 during the dance show. Abbott is a member of his competitor team Out of the Shadows.

Banjo and his lovely wife Abbott are expecting their first child together. He shared the blessed news via an Instagram post in October 2018.

Banjo paid tribute to his wife and his unborn daughter and the pair celebrated the arrival of the baby girl at a lavish baby shower on Saturday, 26th Saturday 2019.

“We are going to be parents and our lives are going to change forever” I love @francescabanjo and our little girl more than words can say. This baby shower was such an incredible way to celebrate... I can’t wait to finally be a dad#babyshower

The two posed in front of white and gold boxes spelling baby. In addition to it, a lavish pink and white cake was decorated with flowers in the background.

Posting images of the duo via Instagram, he captioned,

"We are going to be parents and our lives are going to change forever” I love @francescabanjo and our little girl more than words can say. This baby shower was such an incredible way to celebrate... I can’t wait to finally be a dad#babyshower."

Previously, the star opened about how they faced hard times to conceive their baby. He poured his excitement being a father for the very first time:

'There's no number. Honestly, it's already quite surreal for me to think there's a little baby Banjo on the way, little girl.'

'I'll have to get Perri in. Perri or Jordan to sit there. On standby!'

British dancer, Banjo's estimated net worth is $1 million, as per some online sources, he is not only famous but wealthy too. He also charged an impressive amount for his appearance on TV shows.

Ashley won the third series of BGT along with his team members and received £100,000 (around £9,090 per member) as a winning amount.

Francesca Abbott is a popular British dancer, she is widely known as the member of the dance troupe, Out of the Shadows.