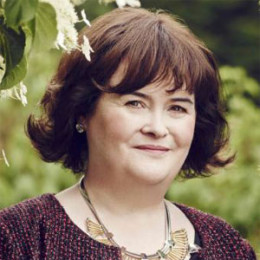 British singer, Susan Boyle, 56 is well known for her appearance on Britain's Got Talent. Though she failed to make it up to the final on the show, her fantastic performance helped her to win millions of hearts. In 2013, she sold over 19 million albums and succeeded to receive two Grammy nominations.

Born on April 1, 1961, Susan Boyle is the daughter of Patrick Boyle and Bridget Boyle. Her father was a miner, and veteran of the Second World and mother, a shorthand typist.

Boyle grew up along with her four brothers and five sisters in Blackburn, West Lothian, Scotland. Her birth name is Susan Magdalane Boyle.

Her parents shifted from Ireland to Scotland. Boyle is the youngest child of her parents and was born when her mother was 45 years old.  During her school days, she was bullied and called, "Susie Simple" because of her learning disability.

Christmas is one of Susan's favourite times of year. Are you all enjoying the festive build up to Christmas?!

Boyle joined the school, but she never completed her schooling. Later she worked as a trainee cook in the kitchen of West Lothian College for six months. She learned singing and attended Edinburgh Acting School to improve her acting skills.

She used to sing in a local Catholic church in local choirs, and perform karaoke around her village pubs and bars.

Susan Boyle started her professional career in 1995, as she had her first audition for the reality show, My Kind of People but unfortunately, she was rejected and mocked by the judges. However, she took her rejection positively and submitted her track on Charity CD in 1999.

In 1998, Boyle released three songs, Cry Me A River, Killing Me Softly, and Don't Cry for Me Argentina. After that, she participated in the much local singing competition which inspired her to audition for Britain's Got Talent.

In August 2008, Boyle auditioned for the third season of Britain's Got Talent. She sang the "I Dreamed a Dream" from Les Misérables in her first round which got more than 10 million views on YouTubve.

She is considered as one of the popular contestants who got direct entry to final. Her acts were one of the top 40 acts in the show. She ended her BGT journey to the second position.

After Britain's Got Talent, she launched her albums; Hope, The Gift, Standing Ovation: The Greatest Songs from the Stage (2012), and Someone to Watch Over Me (2011).

She made her acting debut with British-American Christmas drama film, The Christmas Candle. In 2009, she received her first award, Glenfiddich Spirit of Scotland Awards for the Top Scot of the Year.

In 2010, Susan made three Guinness World Records for "Fastest-selling Album by a Female (UK)," "Most Successful First Week UK Debut Album Sales" and "Oldest Artist to Reach No.1 with a Debut Album (US & UK)".

Simon Cowell is preparing Boyle for a major comeback in her career in 2019 after almost a decade she rose to fame via Britain's Got Talent.

"This is a big year for Susan and she is very much stepping back into the limelight with her AGT champions appearance being just the start."

The 57-year-old singer who is signed to Simon's Syco record label is also working on the release of her eighth album.

Susan Boyle has earned a decent amount of net worth from her singing career. Her net worth is estimated around $33 million (£26 million) as per some online sources. She owns a house in Blackburn costing $384k (£300,000).

Boyle is possibly single at the moment and hasn't married yet as she dedicates herself to caring for her mother before she dies. She never gets enough time for relationship thing.

"People with Asperger's do put a barrier up because they don't know how to trust people. I try not to. I want to let people in and I'd like someone who's a bit like my dad: a strong person, a fair person, probably a very kind person."

"I don't want to say any more about who he is right now as that would be unfair to him, All I'll say is we are around the same age and he was a very nice guy."

Check out the auditioned video of Susan Boyle back in 2009 where she surprised the judges and audiences through her amazing singing skill,