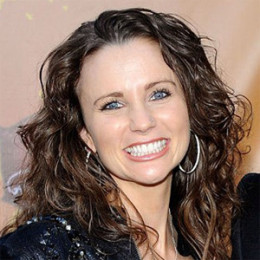 A competitive bodybuilder and a personal trainer Audrey Murdick is also a certified nutritionist.  She is married to American ventriloquist and comedian who has starred in some television shows such as The Tonight Show, Comedy Central Presents and many more.

A competitive bodybuilder and a personal trainer Audrey Murdick is also a certified nutritionist.  She is married to American ventriloquist and comedian who has starred in some television shows such as The Tonight Show, Comedy Central Presents and many more.

Audrey Murdick is happily married to one of the highest-paid comedian Jeff Dunham. The couple was engaged on Christmas day in 2011 and next year on October 12, 2012, they tied a knot. The duo got married in Santa Yenz, California in an intimate ceremony.

After three years of marriage, the couple celebrated parenthood. They were blessed with twin boys James Jeffery Dunham and Jack Steven Dunham on 11 October 2015. Murdick became a mother of altogether five children. Three daughters are from Jeff Dunham's first wife and two are her own.

The couples are going very strong with no sign of problems in their relationship. There are no rumors about the couple splitting or getting divorced.

Are Audrey Murdick and Jeff Dunham Still Together?

The Thieves Guild actress and Minding the Monsters star are bound in a marital relationship for over eight years. On 31 October 2019, Audrey and her family celebrated Halloween wearing different StarWars costumes.

The actress feels proud of being a mother of twin sons and a loving wife of Dunham. Murdick, as well as her spouse, Dunham prefers to spend quality time with their kids in leisure. Like many other cool couples, these two people frequently shares the moment they've spent together on their socials.

Back in 2015, Audrey Murdick, now known as Audrey Dunham filed a lawsuit against Jeff's ex-wife, Paige Dunham. According to the lawsuit, Paige, after her divorce with Jeff, she registered multiple websites named AudreyDunham.com, AudreyDunham.net, AudreyDunham.us, and AudreyDunham.biz, under her name.

Paige and Jeff got divorced in 2010. Paige is an executive producer in the film The Face Of Love. In the lawsuit, Audrey asked for $100 thousand per domain name.

How Much Is Audrey Murdick Net Worth?

Audrey Murdick has an estimated net worth of $1 million. She is living a luxurious and happy life with her husband and children. She earned an enormous amount of money from her career as a certified nutritionist and a bodybuilder. According to the sources, Murdick and her husband share a net worth of $60 million.

As she is the wife of one of the highest-paid comedians who has estimated the net worth of $45 million. Her husband has a car collection of Dodge Challenger RT4, Dodge Challenger SRT8, The Batmobile, The Achmed-mobile, The BatSmart: a 2008 Smart Car, H1 Hummer Slantback, H1Alpha Hummer, which price is more than $100,000.

Audrey Murdick was born on August 29, 1980, in Norko, California USA to parents Steve Murdick and Sally Murdick. She hasn’t given much information about her educational background.

Murdick is a certified nutritionist. As a teenager, she started eating healthy and tried several methods to reduce her weight like yoga and spin lessons. Moreover, she wasn’t able to lose her weight so she got into bodybuilding and got motivated to become a nutritionist. She worked with a trainer David and competed in some fitness competitions.

Being a nutritionist she appeared in several films and is well known for her role in Jeff Dunham: Birth of Dummy, Jeff Dunham: Minding the Monsters and Incredible Edible America.

Audrey Murdick is a happily married woman. She married to one of the highest paid comedian Jeff Dunham. The couple were engaged on Christmas day in 2011 and next year on October 12, they tied a knot