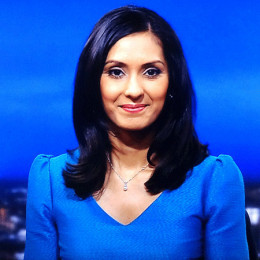 A British television newsreader who is popular as presenter for BBC World News. She hold degree in Journalism, Film and Broadcasting from the University of Wales. She started her career as reporter of BBC Radio Wales and Thames Valley Television. She is also former presenter of weekly music program which used to be aired through Channel 4 FM and for Ajman TV. In 2008 she is worked as presenter of the Your Money programme. Currently she is full time presenter of the BBC News Channel and BBC World News.

Babita Sharma was born on April 1977 in Reading, Berkshire, England. She is of Indian descent. She graduated from the University of Wales with a degree in Journalism, Film, and Broadcasting.

Soon after completing her graduation, Babita Sharma joined BBC Radio Wales and Thames Valley Television. In 2003, she joined BBC as a travel presenter. In 2015, she became a presenter of the BBC World News show Newsday.

In 2018, she covered the British Royal Wedding of Prince Harry and Meghan Markle.

Babita Sharma is possibly single at the moment and not dating anyone. She is quite ambitious and Hardworking which might be the reason her first priority is always her career than anything else.