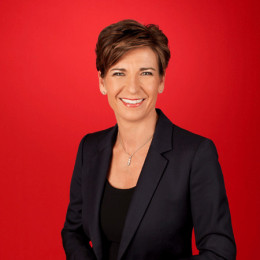 A British journalist who is best known as the host of CNN International's Connect the World program. She holds Master’s degree in Mass Communication from Arizona State University. She started her career working as a print reporter with several business publications. In 1990 she worked as a news reporter for EBN Network and CNBC Europe. During her career she has already interviewed the popular celebrities and personalities like Lady Gaga, Brad Pitt, Tom Hanks, President of Afghanistan Hamid Karzai, United Nations Secretary-General Kofi Annan etc. In 2012, she covered the Olympic Games for CNN. She is also former host of Business International.

She is a very beautiful and attractive woman. She has a very high reputation in the network and is one of the highly on demand television journalists. Talking about her personal life, she is a married woman. Though she is married she has not disclosed any information regarding her married life, husband, and children. She has managed to keep a very low profile of her private life.