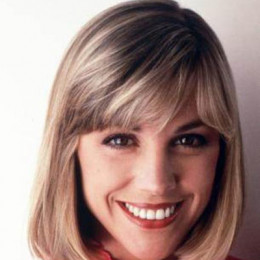 She is an American actress who performs in film, stage as well as in television. She is noted for her roles in the movies The Four Seasons, Jaws 3-D and Nothing in Common.

Bess Armstrong was born Elizabeth Key "Bess" Armstrong on December 11, 1953, in Baltimore, Maryland, U.S. She is American and belongs to the White-American ethnicity.

Her mother, Louise Allen (née Parlange), taught at Bryn Mawr, and Alexander Armstrong, an English teacher at the Gilman School.

She attended the all-girl school, Bryn Mawr School and during her school days, she appeared in more than 100 stage play. She graduated from Brown University in Latin and Theater.

Bess Armstrong started her professional acting career in 1975 the Off-Off Broadway play, Harmony House. She debuted on the screen in 1977 with CBS Sitcom, On Our Own as 'Julia Peters'.  After a year, she cast opposite Richard Thomas in her first TV-movie, Getting Married.

She also featured in the stage production in Seattle of Neil Simon's Barefoot in the Park. Some of her screen credit includes High Road to China,  Lace, Nothing in Common, My So-called Life, Frasier, Boston Legal, House of Lies, Castel, Mad Men, NCIS and others.

Bess Armstrong is happily married to John Fiedler in 1985. The couple exchanged the vow at an intimate ceremony in the presence of their closed ones and family members.

Previously he married to Chris Carreras in 1983. However, the couple failed to handle their relationship and divorced in 1984. The couple ha no children.

Bess Armstrong has an estimated net worth of $3 million. She earned an impressive sum of the amount from movies and TV series.

Check out the Bess Armstrong interview by Johnny Carson on his son The Tonight Show in 1978.

He is a film producer. He was her long time boyfreind. The marital relationship did not last for long.

He is her second husband. They got married after a brief stint of their love affair. They bore three children together but the eldest one died after 6 months of birth.

She was born severely disable. After six months of her birth she died. She is no more.

He was born after the death of his elder sister. He was born healthy and gave joy to his parents.

He is the youngest one and is a happy child. He was born very healthy and is loved by all in the family.