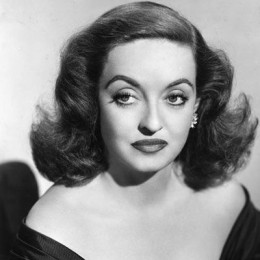 Betty Davis’s real name is Ruth Elizabeth Davis. She was an American actress of theater and film. she was known for her willingness to play an unsympathetic sardonic character. Her nickname was The First Lady of Film. She is the daughter of Harlow Morrell Davis and Ruth Augusta. She was the first female president of Academy of Motion Picture Arts and Science. She was placed in second on American Film Institute's list. She is regarded as one of the greatest actresses in the history of world cinema.

Betty got married four times but her no relation last long. She has three children. Except the marital affairs other affairs haven't been known. She has posed nude for a statue which is placed in public spot in Boston.

She was honored as Tuner Classic Movie’s Star on her 100th birthday. She was the winner of 8th Academy Awards in 1936. Also she won Best Actress Oscar in 1935. She was a single mother.

She was drunker. She used to drink alcohol whole time. She died because of breast cancer at 81 on 6th October 1989.

She amassed a net worth of about $2 million until her death.

With 60 years long career in the industry, Davis is regarded as one of the greatest actresses in Hollywood history.