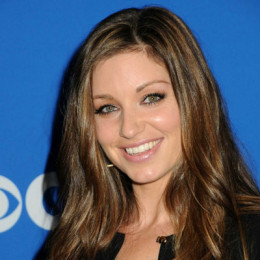 Bianca Kajlich is an American actress recognized best for her performance in the role of Jeniffer in the CBS comedy Rules of Engagement that aired from 2007-2013. She is the daughter of parents, mother Patti Campana, an Italian descent and father, Dr. Aurel Jan "Relo" Kajlich, a Slovak. She went to Bishop Blanchet High School and graduated from Washington State University. She has been active since the year 1999 in the industry.

Bianca Kajlich is a married woman. She has been married twice. She was initially married to a soccer player Landon Donovan but their relationship did not go well and later she married a radio and television personality, Michael Catherwood.

She has an adorable child Magnolia Catherwood from him and the couple is living very happily together. There are no rumors sighted on her at the time being nor there are records of her past dating.

She is active on Instagram and posts plenty of images with her husband and daughter where she has 38.3k followers.

He is a soccer player. The two had been dating since quite a long before getting married. The relationship did not went nice. There were rumors of their reconciliation as well but is confirmed as false.

She is born recently. Her birth was announced at The Late Show With Craig Ferguson where her mother appeared after 5th week of her birth.